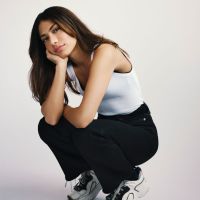 Evin Ahmad, a Swedish - Kurdish actress and writer has quickly become one of Sweden’s most talented and sought-after young talents. Ahmad has been nominated twice for the Guldbagge Awards (in 2018 for Dröm Vidare and in 2020 for Call Mom!), Sweden’s equivalent to the Academy Awards. Currently, Ahmad is set to star in the second season of the Swedish Netflix Original series Snabba Cash, adapted from best-selling author Jens Lapidus' Stockholm Noir crime trilogy. Ahmad is also known for starring in three seasons of the Danish post-apocalyptic Netflix series The Rain and in the Netflix Swedish crime drama series Quicksand. Her film debut came in 2007 with an adaptation of Jonas Hassen Khemiri’s novel One Eye Red. Additional credits include Girls of the Sun, Tsunami and The Restaurant. In 2017, Ahmad's first novel, One Day I Will Build a Castle of Money, was published. The novel discusses the inequality in Sweden between the suburbs and the inner city and has been described as “a brilliantly written and stylistically perfect debut about power and class, guilt and legacy.”