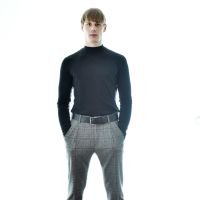 Timon Sturbej was born in Maribor, Slovenia. He graduated from the Academy of Theatre, Radio, Film and Television in Ljubljana and is a company member of the Slovenian National Theatre in Ljubljana, Slovenia. Before being accepted to the Academy, he won the Best Actor Award at the 2013 Teatralny Koufar theatre festival in Minsk Belarus, for his performance in the role of Amor in Moliere's Psyche. In 2017 he was honored with the student Sever Award - named after legendary Slovene actor Stane Sever and awarded by a professional jury - for his role as Bernie in David Mamet's Sexual Perversity. In 2018, for the role as Žele in the film Consequences directed by Darko Štante, Sturbej was awarded with a Vesna as Best Supporting Actor at the Festival of Slovenian Film. Most recently he has completed production on Riders, directed by Dominik Mencej and Wake Me, directed by Marko Šantić. He is currently in production on the TV mini-series, Inhumanum: The Inhumanity of Many, directed by Igor Zupe.