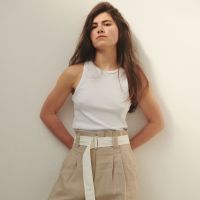 Hanna van Vliet studied Drama and Contemporary Music Theatre at Amsterdam University of the Arts, where she graduated in 2014. A Golden Calf nominated actress and creator, she plays the lead role in the internationally acclaimed drama series, ANNE+, which she co-created. ANNE+ has received two nominations for the Prix Europe award as well as a Golden Calf award for van Vliet as “Best Actress in a Drama Series" at the Netherlands Film Festival in 2020. A feature version of ANNE+ with van Vliet in the leading role premiered in October 2021. Her career also includes two nominations for a Musical Award for Fiddler on the Roof and De Tweeling. Her recent work includes the lead roles in the features Quicksand, which premiered at the Netherlands Film Festival in September 2021 and Lost Transport, due for release in early 2022. She is currently filming the high-end drama series, De Droom van de Jeugd. Van Vliet is an advocate for a broad representation of female leads and queer characters in the (Dutch) film and TV landscape.