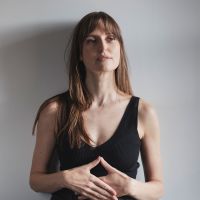 Clare Dunne graduated from the Royal Welsh College of Music and Drama and was immediately cast in a lead role in the Druid Theatre Company’s acclaimed production of Playboy of the Western World directed by Garry Hynes. She’s since appeared in numerous theatre productions across Ireland and the UK, notably in the Donmar Warehouse as Portia in Julius Caesar directed by Phyllida Lloyd which transferred to St Ann’s Warehouse, Brooklyn. She went on to appear as Prince Hal in Phyllida Lloyd’s acclaimed production of Henry IV which also transferred to the new St Ann’s Warehouse to huge critical acclaim. Dunne has also had a heady past two years on the big and small screen. She starred as Amanda, the female lead in the first season of the acclaimed BRON/AMC+ and RTE series, KIN. She wrote and starred in Herself (Element Films), directed by Phyllida Lloyd, which premiered at the 2020 Sundance Film Festival to rave reviews and was picked up for international distribution by Amazon Studios. The film won the Women Film Critic Circle Award for 2021 and the Dublin International Film Festival Discovery Award (for Clare Dunne) as well as the Human Rights Film Award in 2020.