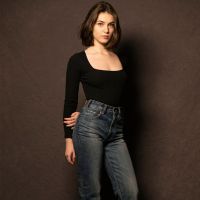 Anamaria Vartolomei, a French-Romanian actress, began her career at the tender age of 11 opposite Isabelle Huppert in My Little Princess, directed by Eva Ionesco, for which she won Best Actress at the 2012 Festival de la Ciotat. Since then, she has barely stopped. In 2014, she appeared in Jacky in the Kingdom of Women, directed by Riad Sattouf, with Charlotte Gainsbourg. In 2016, she was cast in Tran Anh Hung’s Eternity alongside Bérénice Béjo, Audrey Tautou and Mélanie Laurent, and had leading roles in Frédéric Beigbeder’s The Ideal with Audrey Fleurot and in My Revolution directed by Ramzi Ben Sliman. In 2017, she starred opposite Lambert Wilson in the historical drama The Royal Exchange, directed by Marc Dugain. In 2020, Anamaria was cast in How to Be a Good Wife directed by Martin Provost and in Just Kids directed by Christoph Blanc, for which she was nominated as Young Actress at the César Awards. Vartolomei was most recently cast in the leading role in Happening, directed by Audrey Diwan, which won the Golden Lion at the 2021 Venice Film Festival.