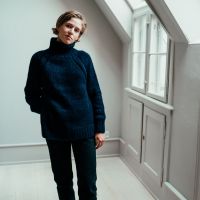 Marie Reuther hails from Denmark and received her theatre training at the Danish National School of the Performing Arts, graduating in 2020. Prior to that, in 2017, she had started acting in various short films and on the stage. Reuther's international breakthrough came when she was cast in the leading role in HBO’s first Danish-language original, the mystery thriller, Kamikaze, which had its broadcast premiere in November 2021. Reuther's role required that she be in almost every shot of the 8-part series, building a strong and empathetic character along the way. For her performance, she was honoured with the esteemed Best Actress Award in the International Competition at Series Mania in Lille, France in 2021. In addition to Kamikaze, Reuther recently had her debut at The Royal Danish Theatre in Molière’s final work, The Imaginary Invalid.