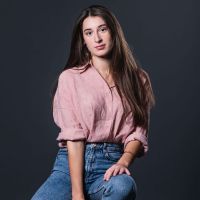 Born in Croatia, Gracija Filipović received her theatre training in Dubrovnik and shot her first film in 2014. Her collaborative work with director Antoneta Alamat Kusijanović includes two award-winning films which have brought her both international recognition and acclaim. In Kusijanović's short film, Into the Blue, Filipović plays an emotionally scarred young women, desperate to reconnect with her best friend. The film won numerous awards, including a Special Mention at the Berlinale's Generation programme, the Heart of Sarajevo Award for Best Short Film and the Prize of the Youth Jury at the highly regarded Oberhausen Short Film Festival. It was also a finalist for the Student Academy Award. Filipović's debut in a feature film was in Kusijanović's Murina, which premiered in the Director's Fortnight of the Cannes Film Festival and won the prestigious Caméra d'Or. Apart from her award-winning acting career, Filipović is a professional swimmer and tap dancer. In her spare time, she is studying biology in Zagreb.