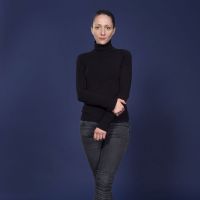 Martina Apostolova studied acting at New Bulgarian University in Sofia. She has performed on stage throughout Bulgaria, acting in more than twenty contemporary plays. She made her big screen debut as the lead in Nadejda Koseva's IRINA in 2018, for which she was awarded Best Actress at eight international film festivals. In addition to her work on several TV productions, Martina has also acted in the short film WHOLE directed by Slava Doytcheva and most recently in the feature, LAMENT FOR THE SILENT FOOL directed by Dimitar Kutmanov.