Film Sales Support Outside of Europe 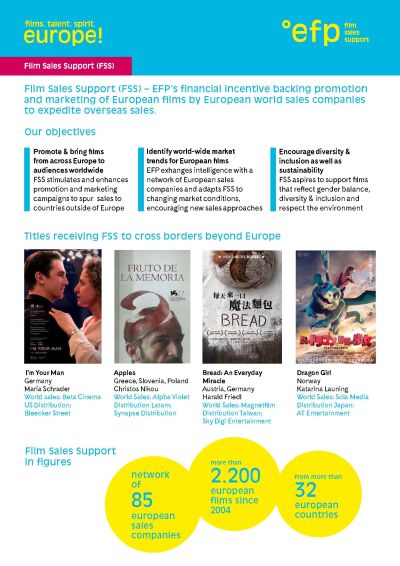 EFP (European Film Promotion) promotes European films and talent around the world. With Film Sales Support (FSS) it backs marketing campaigns of European world sales companies targeting countries outside of Europe. Public calls invite sales companies who have registered in the Funding & Tender Opportunities Portal of the European Commission and have been approved by the national film promotion institutes to submit applications by set deadlines (see below).
Film Sales Support is funded by the Creative Europe – MEDIA Programme of the European Union.

Gender balance, diversity & inclusion and sustainability are important for EFP. Therefore, we appreciate and encourage promotion campaigns that respect the environment as well as the diversity of filmmakers and films (see Memorandum of Understanding for EFP on Diversity & Inclusion).

FSS is available for:

FSS Classic for the physical promotion, combined with digital elements, of films at the 9 selected film festivals and markets outside of Europe (see list below).

FSS Digital for the purely digital promotion of films at the 9 selected international film festivals and markets outside of Europe which offer a hybrid version*, and at the online versions of 2 markets inside of Europe, the European Film Market (EFM) and the Marché du Film.

NEW: FSS Digital Plus for the purely digital promotion of films at additional hybrid film festivals* (inside and outside of Europe) with an international industry and outward reach

NEW: FSS Inclusion as a pilot for the purely digital promotion of films depicting gender balance, equity and inclusion at the 6 selected international film festivals outside of Europe which offer a hybrid version* (see list below) and at additional specialised hybrid film festivals* (inside and outside of Europe) with an international industry and outward reach (Support Criteria)

*hybrid means that the festival offers an essential online part: online accreditations that allow international buyers to participate in the festival if they cannot attend in person, online market screenings and online panels