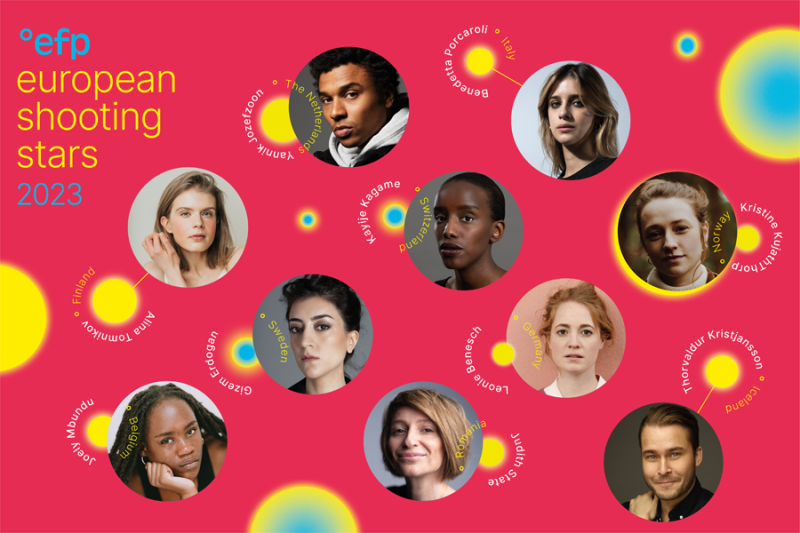 European Film Promotion (EFP) is delighted to announce the up-and-coming acting talent who have been selected for the next edition of EUROPEAN SHOOTING STARS. They will be introduced to the international press, film industry and the audience during the 73rd Berlinale. The four-day tailormade promotion and networking programme (running 17 – 20 February 2023) is capped off with a celebration of the talent at an Awards Ceremony at the Berlinale Palast.

The European Shooting Stars 2023  — including eight women and two men — were selected from a pool of 27 nominees by an international jury, comprised of Polish director Jan Komasa, Dutch casting director Rebecca van Unen, Norwegian producer Maria Ekerhovd, Variety’s international features editor Leo Barraclough from the UK and former Spanish Shooting Star Veronica Echegui. These five experts recognised the talents' remarkable potential for an international career based on several factors, including their stellar work in the feature films and drama series which were submitted for their nomination (and which are noted in bold in their bios below).

“We are very grateful to the national promotion and film institutes who gave us the opportunity to discover their countries' emerging talent and to the jury who faced a true challenge in selecting the 10 best from such a strong group of nominees. We are very pleased to present their selection of European Shooting Stars 2023 which is characterised by diversity in age, experience and cultural backgrounds but united in its representation of exceptional acting talent. They are all truly ready for international discovery”, says Tina Hajon, programme director of EUROPEAN SHOOTING STARS.

Newcomer Joely Mbundu from Belgium excelled as Lokita in the 2022 Cannes entry Tori and Lokita by Luc and Jean-Pierre Dardenne. It is the first leading role for the 18-year-old actress, who is the youngest in this year's Shooting Stars line-up. The jury was impressed by “her emotional intensity” which serves the film so well…she mixes a strength of personality with an openness and vulnerability that moves the audience.”

Finnish actress Alina Tomnikov is known for her leading role in the critically acclaimed and multi-award winning short film, Rabobesto, directed by Mari Mantela based on Alina’s original idea. She starred in the Sky Original drama series Funeral For a Dog alongside former German Shooting Star Albrecht Schuch and played the lead in Pamela Tola’s feature film, The Worst Idea Ever, which is due for its release in early 2023. The jury lauds her ”playfulness and fragility” and how ”her character grabs the audience by the lapels, and compels them to fall in love with her.”

German actress Leonie Benesch played Eva in Michael Haneke’s The White Ribbon when she was 18 and was hailed as a discovery. In 2018 she received the German Actor’s Award for her role as Greta in the German series Babylon Berlin. Leonie’s most recent role is the lead in Ilker Çatak’s The Teachers’ Lounge, to be released in 2023. The jury was delighted by her performance as an idealistic teacher who is battling to solve a dilemma, while resisting institutional pressure to compromise: “She shows a nobility and sincerity of character that transcends the everyday setting of the school, while keeping the audience guessing as to what will happen next.”

From the first moment Iceland’s Thorvaldur Kristjansson appears on screen in Ása Helga Hjörleifsdóttir’s A Letter From Helga, “he emanates charisma and completely inhabits the role of a love-sick farmer”. This is the jury’s verdict on Iceland’s Shooting Star, who is a celebrated and award-winning film and theatre actor in his home country. Trained at The Juilliard School's Drama Division in New York, Thorvaldur’s credits include Black’s Game, The Minister and I Remember You.

Benedetta Porcaroli from Italy ”carries Carolina Cavalli’s quirky comedic Amanda with great assurance, as well as transmitting a high temperature that keeps the film at fever pitch”. Although Benedetta is an emerging actress, ”she emanates a strong personality and a particular way of looking at the world”. Her debut on the big screen was in 2015 in Perfect Strangers, which was quickly followed with roles in critically acclaimed films such as The Catholic School, 7 Women and a Murder and the Netflix series, Baby.

Yannick Jozefzoon from The Netherlands was nominated for his second Golden Calf in 2022 for his leading role as an expectant father in Femi directed by Dwight Fagbamila. Yannick began acting in 2002 with the theatre group DNA and appeared in several film and television productions such as Amsterdam Vice, Hollands Hoop and Geldwolven. The jury was enthusiastic about Yannick’s “display of a raw yet controlled energy combined with a sensitivity in Femi…He brings an intense conviction to the role, perfectly expressing the inner turmoil of the young man.”

Norwegian actress Kristine Kujath Thorp is known for movies and drama series such as Fanny, The Burning Sea and Ninjababy, for which she won the Amanda Award as best actress in 2021. In Sick of Myself by Kristoffer Borgli, which premiered in Un Certain Regard in Cannes 2022, Kristine plays a young woman, Signe, who wants to attract people’s attention by any means necessary. The jury is deeply impressed by her performance: “There are many nuances to this multi-layered film, which is satirical and dramatic, and she navigates it with verve. Her character undergoes a radical change in appearance, which made the role even harder to pull off.”

Judith State is a professional dancer and discovered acting later in life, working with prominent Romanian directors. She won the Gopo Award for her leading role in Marius Olteanu's debut, Monsters. Judith has also been in films such as Sieranevada, Malmkrog, The Father Who Moves Mountains and Refuge as well as R.M.N. by Cristian Mungiu, for which she was nominated as a Shooting Star. The jury extoled her performance in the film: “She exhibits a natural ability and a strong presence…bringing an authenticity and charm to the role…She is very much in the moment, and is able to reach through the screen to move the audience.”

The jury believes Swedish actress Gizem Erdogan “has the charisma and ability to make an impact in the international films arena.” Gizem is already well known for her roles in hit drama series and films such as Caliphate, Dream On, and Love and Anarchy and stars in the Netflix’s series The Playlist as an architect of the Swedish music app Spotify.

With the role of Rama in the Venice award-winning film Saint Omer by Alice Diop, Swiss artist Kayije Kagame makes her highly acclaimed feature film debut as an actress. The jury was persuaded by her portrayal of a novelist whose convictions are shaken by a traumatic court case. In the role, she relies heavily on body language and facial expression “creating a special aura that is mesmerising and holds the gaze of the viewer in every scene”.

With a four-day intensive customised programme, EUROPEAN SHOOTING STARS provides an international networking platform for the selected talent to meet journalists, casting directors, producers and filmmakers in Berlin. It offers a unique opportunity to create the professional network needed for the talent to embark on an international career. The programme culminates in a glamourous awards ceremony at the Berlinale Palast on Monday 20 February, where each actress and actor will be honoured with the European Shooting Stars Award.

european shooting stars 2023 is supported by