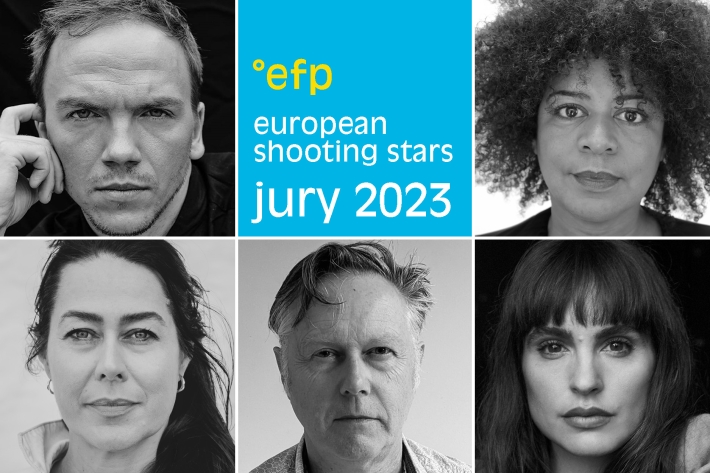 Five acclaimed experts selected by European Film Promotion (EFP) have the challenging task of deciding which of the 27 nominated acting talents will take part in the upcoming edition of EUROPE SHOOTING STARS (17-20 February, 2023) at the Berlin International Film Festival.

With their extensive experience in different fields of the film industry, the jury members will select the ten most talented and internationally versatile actresses and actors from the 27 candidates nominated by their national film promotion institutes and film centres, which comprise the member organisations of EFP.

“We are delighted to have this renowned group of jury members joining us this year. Their experience will ensure that the selection is top-notch, and will greatly enrich the overall programme. We are looking forward to their discoveries and a new cohort of up-and-coming European acting talent” says Tina Hajon, Programme Director of the European Shooting Stars.

Polish jury member, Jan Komasa, is a director and screenwriter, whose films have premiered or been honoured in Berlin, Cannes, Venice, Tribeca, Toronto, Palm Springs and Chicago. His multi-award-winning film, Corpus Christi, was nominated for an Oscar as Best International Film. He is joined by award-winning producer Maria Ekerhovd founder of the Norwegian production company Mer Film. Her most recent productions include The Innocents by Eskil Vogt, and Gunnar Vikene’s War Soldier, the 2023 Norwegian entry for the Oscars. Ekerhovd was also the Norwegian co-producer on Jonas Poher Rasmussen’s triple Oscar nominee, Flee, which was awarded best documentary at the European Film Awards. Spanish actress, director, and former European Shooting Star Veronica Echegui caught the eye of the industry and public with film such as I am Juani, which earned her a Goya nomination in 2006 an Kathmandu Lullaby for which she won her first Gaui Award in 2012. She has worked on numerous international projects such as Fortitude and Trust, and in 2022 she won a Goya Award for Best Short Film for Tótem Loba, this time, in her debut as a screenwriter and director. Dutch casting director Rebecca van Unen has cast a diverse mix of critically acclaimed projects with credits that include Winter in Wartime by Martin Koolhoven and Layla M by Mijke de Jong. Recent projects include Matthijs van Heijningen’s Forgotten Battle and Jamila Žbanić’s Quo Vadis Aida which was nominated for an Oscar as Best International Film and won Best Film, Director, Screenwriter, and Actress at the 2021 European Film Awards. Rounding out the jury is Variety’s international features editor Leo Barraclough who also writes for the publication and edits many of their e-Show Dailies. Prior to joining Variety, he was features editor, and then managing editor of Screen International. He started in film and TV trade journalism at Moving Pictures International, where he was news editor and then deputy editor.

For 26 years European Film Promotion has been organising its flagship programme EUROPEAN SHOOTING STARS during the Berlin International Film Festival – an initiative designed to discover and promote talented actresses and actors from throughout Europe to the international film scene.

The EUROPEAN SHOOTING STARS 2023 will be announced in mid-December. At the Berlin International Film Festival the ten selected talents will take part in a four-day programme of networking as well as industry and press events, culminating in the glamorous presentation of the European Shooting Stars Awards at the Berlinale Palast.

EUROPEAN SHOOTING STARS, which is supported financially by the Creative Europe MEDIA Programme of the European Union and the participating national film promotion institutes (EFP’s member organisations) has placed some of the most promising young actors from all over Europe into the limelight over the past 25 years and proven to be an essential stepping stone for launching and continuing their international careers.