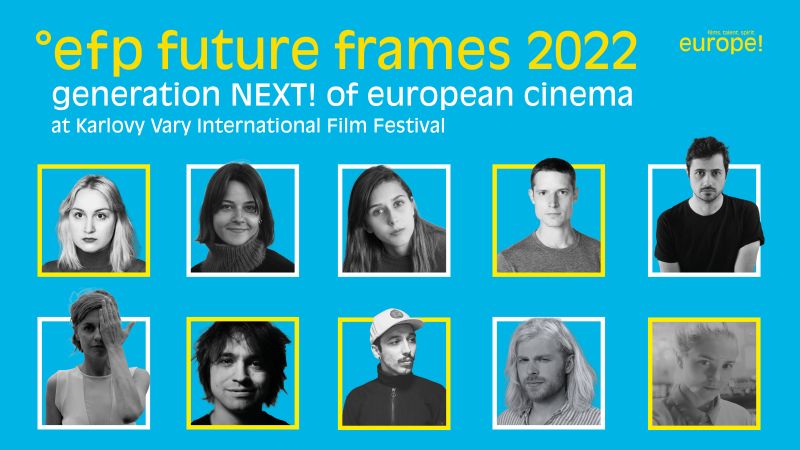 EFP FUTURE FRAMES - Generation NEXT of European Cinema puts a spotlight on outstanding young directors from Europe. Ten film students and graduates will be presenting their films at the 56th Karlovy Vary International Film Festival (KVIFF), running from 1 to 9 July, 2022.

The filmmakers are nominated by their countries' national film promotion institutes, with the final selection being done by KVIFF's artistic director Karel Och and his team of programmers. The young directors will be offered a two-part schedule, starting with an online pre-programme including pitching training and industry meetings (27– 28 June). During the festival, EFP will introduce the young directors and their films – all Czech premieres – to the public, film industry and press. The three-day event, running from July 4–6, will be rounded off by a master class.

The seventh edition of EFP FUTURE FRAMES – Generation NEXT of European Cinema, organised in close cooperation with the festival, will introduce the following up-and-coming directors with their films from:

10.08.2022 - EFP (European Film Promotion) is issuing a public call for FSS Classic for the submission of classic and digital promotion campaigns of recent …

public call for fss at the asian content & film market 2022

13.07.2022 -  EFP (European Film Promotion) is issuing a public call for FSS Classic and FSS Digital for the submission of classic and/or digital …

public call for fss at the toronto iff 2022

05.07.2022 - Important InformationAs EFP is still in the process of applying to Creative Europe MEDIA for FSS 2022-24, individual grant confirmations and …