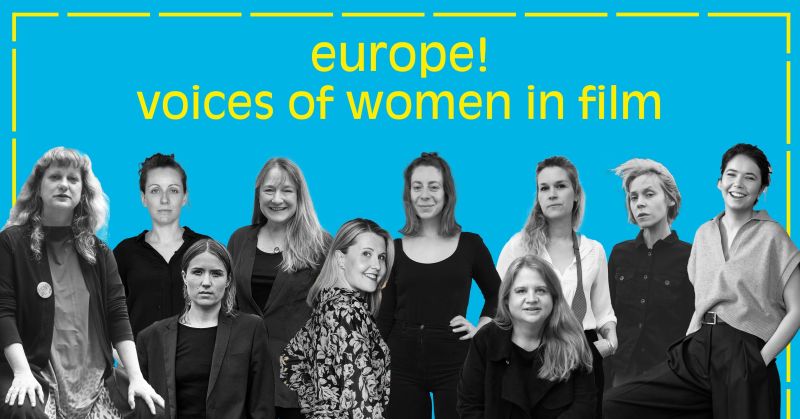 European Film Promotion's (EFP) flourishing collaboration with Sydney Film Festival (June 8 – 19, 2022) will now be presenting EUROPE! VOICES OF WOMEN IN FILM in its seventh edition. The programme will cast a spotlight on ten selected films by outstanding European women filmmakers for the Australian audience, film industry and press.

EFP has put together a hybrid programme including a virtual EWA Talk with the European Women's Audiovisual Network as well as networking events and panel discussions on site for the four filmmakers travelling to Sydney. Antonia Campbell-Hughes, Alina Grigore, Tea Lindeburg and Eva Vitija will be there in person to present their films to the festival audiences in June, while those women directors not travelling to Sydney will introduce their films in short introductory clips shown before the screenings.

“We are thrilled to be celebrating this year's festival edition with our initiative on the traditional dates in Sydney’s cinemas and look forward to offering an online/on-site programme that brings European women filmmakers together with their audiences and Australian film professionals beyond digital reality”, says EFP’S Managing Director Sonja Heinen. “The selection of films impresses by the differences in their protagonists’ identities, stories, perspectives and ambitions across an extensive spectrum of cinematographic approaches. Our thanks go to the Sydney Film Festival for sharing this platform for ten films by the most promising of European women filmmakers.“

“Audiences can anticipate 10 marvellous films from talented directors as part of the Europe! Voices of Women in Film program. From the top prize winner at the San Sebastián Film Festival, Blue Moon, to the story of renowned author Patricia Highsmith and her daring ideas about sexuality in Loving Highsmith, these films will be sure to captivate and inspire filmgoers. And we so look forward to welcoming filmmakers back to the Festival to interact with the audience and the Australian film industry“, says Sydney Film Festival Director Nashen Moodley.

Based on the Danish literary classic „En Dødsnat“ by Marie Bregendahl, Tea Lindeburg’s award-winning feature film As In Heaven takes us to the Danish island of Funen during the 19th century. A complicated and fateful birth for her mother changes the life of the eldest daughter, 14-year-old Lise, shattering the young woman's dreams of a different future. Bitch, a Derogatory Term for a Woman is the film debut by the well-known Slovenian theatre director and actress Tijana Zinajić: 27-year-old painter Eva reflects on the life she has or has not achieved. Using Slovenian street language, the subversive comedy focuses on a generation of young people who have to recognise and fight for their place and voice in a time of countless opportunities. Blue Moon is the first feature film by the actress Alina Grigore as a director. She creates a storyline of explosive emotions with two young women at the centre who try to escape from family traditions and sexual repression. The Finnish director and writer Alli Haapasalo returns to Sydney with her passion for telling encouraging stories with the focus on women. Her third feature film, Girl Picture, shows three friends on the brink of adulthood, shifting between love and desire, and had its world premiere at Sundance before heading to the Generation 14plus section at Berlin in February. It Is In Us All by the former Irish European Shooting Star Antonia Campbell-Hughes impresses with an atmospheric drama where two men of different ages collide in a car accident and develop an ambivalent relationship testing their inner vitalities. Based on Patricia Highsmith's unpublished diaries and notes as well as testimonies from friends, lovers and relatives, Eva Vitija's Loving Highsmith shows the lifelong search for (sexual) identity by one of the most prolific authors of all times beyond entrenched binary gender conceptions. In Maya Nilo (Laura), the Swedish scriptwriter, editor and director Lovisa Sirén deconstructs and reassembles family constellations and shows how difficult it is to break common stereotypes. A road trip from Stockholm to Portugal becomes a liberating adventure for two estranged sisters and a teenage daughter. Small Body by the Italian director Laura Samani takes us on a magical journey to a woman’s self-determination: set in the archaic Christian world of Italy’s Friuli Venezia Giulia region in 1900, a young mother ventures out to free her stillborn baby’s soul. Talking About the Weather, the graduation film by the German filmmaker Annika Pinske, is a quiet drama about the relationship between mothers and daughters, reflecting urban-rural alienation, East-West origins and the risk a woman with professional ambitions and alternative life plans is willing to take. Bianca Stigter's Three Minutes - A Lengthening transforms rare colour home-movie footage shot in 1938 Poland into a remarkable testament to victims of the Holocaust. Produced by Steve McQueen and narrated by Helena Bonham Carter, her detective work uses the only visual record remaining of members of the Jewish community in Nasielsk to recover their stories.