engaging stories and new perspectives of a europe in flux 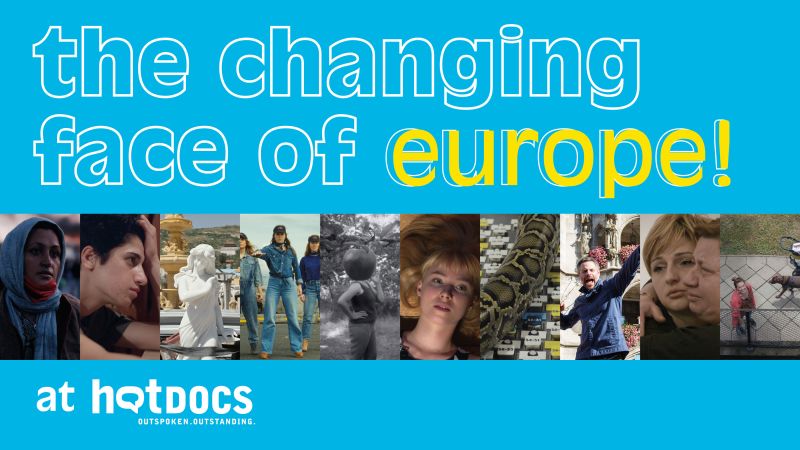 European Film Promotion (EFP) is pleased to announce the fifth edition of THE CHANGING FACE OF EUROPE in collaboration with Hot Docs  - Canadian International Documentary Festival, taking place from 28 April - 8 May 2022 in a hybrid format. This year’s selection includes nine feature films and one short that explore themes centered around environmental activism, the plight of refugees, the destructive powers of war and more.

The CHANGING FACE OF EUROPE features 10 outstanding new European documentaries selected by the festival from over 60 submissions made by the EFP member organisations, the national film institutes. In addition to festival screenings and access to a comprehensive industry programme, the directors and producers of the films will be matched with key distributors, buyers and festival programmers via prior virtual one-to-one meetings arranged by EFP. EFP's initiative is supported by the Creative Europe – MEDIA Programme of the European Union and the participating EFP member organisations.

“Hot Docs is thrilled to partner with EFP for the fifth year to present a selection of documentaries that give us glimpses of a Europe in transition,” said Shane Smith, director of programming for Hot Docs. “The talented filmmakers in this program offer new perspectives while bringing a sense of urgency to a wide range of topics.”

“Films about one's own identity, about fears in relation to war and environmental destruction and about the future are the focus of this year's film selection. In times like these, the different perspectives are all the more important, with dialogue and exchange at the core of our programme, said EFP’s Managing director Sonja Heinen. “We thank Hot Docs for the opportunity to share the vibrancy of Europe through its films, and to connect documentary filmmakers with the North American industry.“

In Atomic Hope – Inside the Pro-Nuclear Movement, the multi-award-winning Irish director Frankie Fenton asks whether nuclear energy is the only carbon-neutral technology capable of tackling the climate crisis while the Lithuanian artist and filmmaker Emilija Škarnulytė explores this theme in a completely different way: Her documentary Burial is a meditation on nuclear energy and the great effort required to deal with its waste. Playwright, stage director and former Icelandic European Shooting Star Álfrún Örnólfsdóttir, introduces us in Band her debut as a film director, to an all-female art rock band dealing with motherhood, aging and a self-imposed deadline to achieve success. All three films celebrate their world premieres in Toronto. In Bigger than Trauma, Vedrana Pribačić shows women gathering in an unorthodox therapy group to confront the aftermath of sexual violence during the Croatian War of Independence. In Toronto the first feature documentary by the Croatian filmmaker and journalist celebrates its International premiere.
North American premieres in this year’s programme include: How The Room Felt, an atmospheric film by Georgian director Ketevan Kapanadze that enters inside a cramped Georgian house where a group of female and non-binary friends have created a space safe from their intolerant surroundings; Just Animals, the portrait of two Finnish sisters grappling with activism’s hope and hopelessness while on divergent paths, directed by Saila Kivelä and Vesa Kuosmanen from Finland; and Nasim, the story of an Afghan mother of two living in the largest refugee camp in the EU and dreaming of her freedom. The German by Ole Jacobs' and Arne Büttner's  film won two awards at DOK Leipzig 2021.
For two years, Polish director Paweł Łoziński placed his camera on the balcony of his flat and observed the people passing by below. In The Balcony Movie, that celebrates its Canadian premiere, the filmmaker approaches them, asks questions, listens and creates a space for conversations that rarely exist between strangers. Also, the Netherlands entry A Marble Travelogue by Sean Wang will be screened in Canada for the first time. The documentary is an arresting study of globalization that follows a pristine marble slab mined in Greece, processed in China, and eventually re-sold as fridge magnets in Europe. In her 30-minute visual essay Crotch Stories, French filmmaker Myleine Guiard-Schmid wonders if birth, apart from the joy of new life, can't also bring pleasure not only pain. Guiard-Schmid speaks with women who professionally support women in childbirth or who have given birth themselves and illustrates the descriptions with stop-motion sequences as well as with drawn and painted animations.

Hot Docs is a not-for-profit organization dedicated to advancing and celebrating the art of documentary and to creating production opportunities for documentary filmmakers. During the annual Hot Docs Canadian International Documentary Festival, April 28 to May 8 in Toronto and online, the Festival will offer a dynamic hybrid experience for industry delegates, including a live three-day programme of knowledge sessions and networking events on its first weekend and online market programmes and sessions, including the renowned Hot Docs Forum, Hot Docs Deal Maker, Distribution Rendezvous and The Doc Shop. Year-round, Hot Docs supports the Canadian and international documentary industry with a multi-million-dollar production fund and financing initiative portfolio, including the Hot Docs Ted Rogers Fund, CrossCurrents Doc Funds, Hot Docs-Slaight Family Fund, Hot Docs-Blue Ice Group Fund and Hot Docs Partners, and valuable professional development programs, including Doc Ignite and Doc Accelerator.