european shooting stars 2022: a huge thanks to our partners 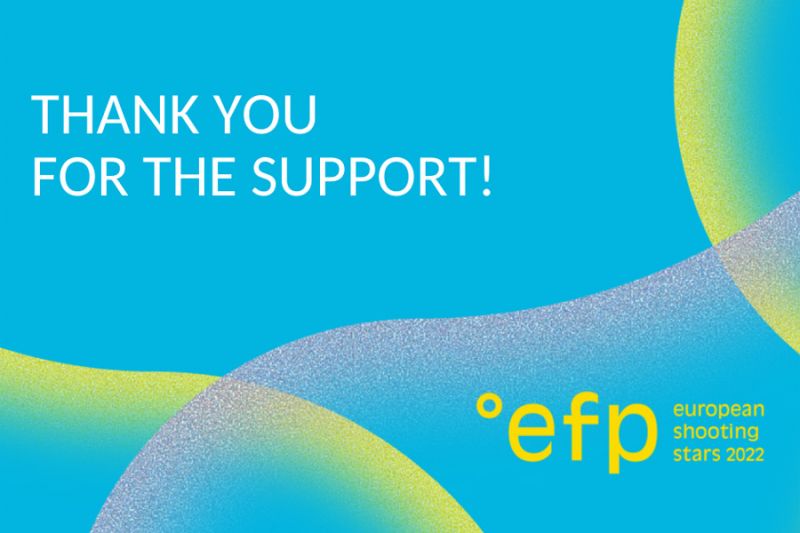 This year’s hybrid programme has just kicked off with online pre-festival networking events where the 10 EUROPEAN SHOOTING STARS 2022 met virtually with more than 50 international casting directors. The tailor-made programme will be continued on-site from 11 to 14 February with a press day and further industry meetings with casting directors, culminating in the EUROPEAN SHOOTING STARS Award ceremony on Monday evening, 14 February.

All of this would not have been possible without the precious support of the very dedicated partners of EFP’s talent platform and networking initiative:

Creative Europe – MEDIA Programme of the European Union
Ever since the start of the EUROPEAN SHOOTING STARS initiative, the MEDIA sub-programme dedicated to financial support in the development, distribution and promotion of European films and its audiovisual industries has been a crucial partner in making EFP’s flagship initiative happen. Thanks to MEDIA’s unwavering commitment, the programme has evolved into a tailor-made industry event that brings together talent, casting directors and producers.

Film- und Medienstiftung NRW and Medienboard Berlin-Brandenburg
Two of the most influential German regional film funding organisations have been trusted and passionate supporters of the programme from the start.

Spotlight
The internationally renowned casting platform for theatre, television and film is partnering with EUROPEAN SHOOTING STARS for the fourth time this year, with a focus on Actors Industry Network’s  online & on-site events. On top of its extensive online database – which can be especially useful for talent from smaller European counties, Spotlight also has studios in London along with a team of experts across Europe.

L’Oréal Paris
Famous for providing the perfect red carpet look for stars like Helen Mirren, Kate Winslet, Jane Fonda, Eva Longoria and former European Shooting Star Heike Makatsch, L’Oréal Paris is a longstanding supporter of the up-and-coming actresses and actors. Their skilled make-up artists ensure that the European talent always look their best at the many official events and photoshoots they take part in.

Variety has presented the EUROPEAN SHOOTING STARS to the international film industry since 2010. The publication has been the seminal voice of the entertainment industry for more than 115 years and counting, and is the trusted source for the business of global entertainment. Read by a highly engaged audience of industry insiders, Variety’s multi-platform content coverage expands across digital, mobile, social, print and branded events and summits.

EFP also wishes to thank Screen International, Blickpunkt Film and Cineuropa for their longstanding support of the initiative. Our thanks also go to the online platform partners HeyUGuys and Festival Scope and to ekran magazine.