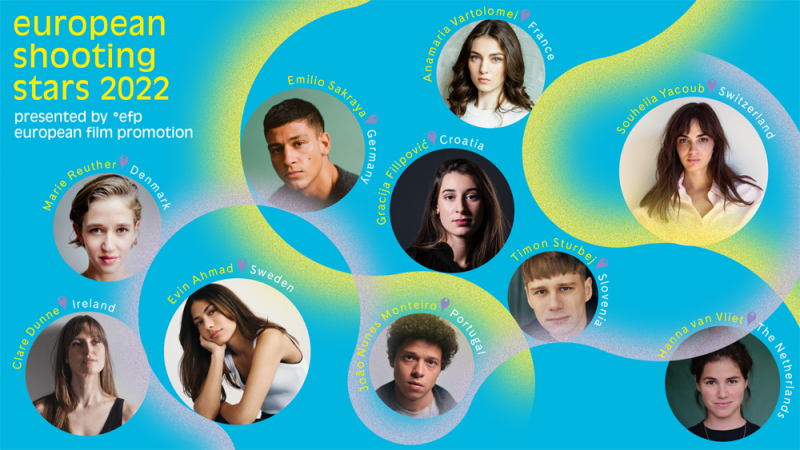 European Film Promotion (EFP) is pleased to announce the ten emerging European talents for this year's 25th anniversary edition of EUROPEAN SHOOTING STARS. From 11 - 14 February 2022, seven actresses and three actors will be presented to the international press, the industry, and the public in an exclusive hybrid programme during this year's 72nd Berlinale (10 – 20 February 2022) adapted to the current Covid protocol. One of the programme's many highlights will be the European Shooting Stars Awards Ceremony on 14 February 2022 at the Berlinale Palast.

The 5 person international jury of Swedish-Georgian filmmaker Levan Akin, casting director and president of the International Casting Director’s Network (ICDN) Timka Grin from Bosnia and Herzegovina, former Italian European Shooting Star Sara Serraiocco, Luxembourgish film producer Bernard Michaux and German based film scholar and curator Yun-hua Chen have selected the ten outstanding talents and affirmed their immense potential for an international career based on many factors, including evaluation of the nominated feature films and series (in bold below).

Her collaborative work with director Antoneta Alamat Kusijanović has brought Gracija Filipović from Croatia international recognition and acclaim. Filipović's first leading role in a feature film was in Kusijanović' Murina, which was awarded the Camera d'Or in Cannes. The jury was impressed by her “intuitive and original performance, with a level of maturity which belies her years”.

Marie Reuther from Denmark convinced with her transformative performance and the obvious joy of acting in her debut lead in HBO’s first Danish-language mystery thriller Kamikaze. “Her face can express a multitude of feelings in a layered and versatile way…She makes everything fun to watch”. For her performance, she was honoured with the Best Actress Award at Series Mania in Lille, France.

The jury was persuaded by “her eyes that tell stories in a way that no words can”. Anamaria Vartolomei from France stars in the Golden Lion winner Happening by Audrey Diwan. The jury was also impressed by her “readiness to push herself to the limits…and embody even the most impenetrable roles”. The extensive filmography of the young actress, who starred alongside Isabelle Huppert in My Little Princess at the age of eleven, also includes feature films like Jacky in the Kingdom of Women, Eternity, The Ideal, My Revolution, How to Be a Good Wife and Just Kids.

Emilio Sakraya from Germany "delivers a memorable performance that emphasizes his star quality and an immense potential as a lead actor.” Nominated for Til Schweiger's The Salvation of the World as We Know It, he previously starred in films and series such as Electro Ghetto, 4 Blocks, Cold Feet, Warrior Nun and One Night Off. In Fatih Akin's upcoming feature Rheingold, Emilio plays the lead, rapper Xatar.

Well-known for her leading role and as co-writer of the critically acclaimed and multi-award winning feature Herself, directed by Phyllida Lloyd, Clare Dunne from Ireland starred as Amanda in the first season of the notable AMC+ and RTE series KIN. The jury is enthusiastic about her performance, which “communicates a deep sense of self-awareness and well-founded confidence”.

For her role in ANNE+, which she also co-created, Hanna van Vliet from The Netherlands received a Golden Calf nomination as "Best Actress in a drama series" at the Netherlands Film Festival in 2020. The jury is thrilled by her screen presence, which is ″full of life and outstandingly sympathetic, imbued with a strong sense of precision, sensitivity, and authenticity” and attests to “huge star potential” for the young actress who has also fought for a broad representation of female leads and queer characters in the (Dutch) film and television landscape.

Portuguese actor João Nunes Monteiro’s credits include feature films such as Aristides de Sousa Mendes by Francisco Manso and Mosquito by João Nuno Pinto, for which he won the Cinema Academy Sophia Award as Best Actor. The jury is impressed by his performance in Miguel Gomes and Marueen Fazendeiro's The Tsugua Diaries which premiered in this year’s Director’s Fortnight at the Cannes Film Festival: “His quiet intensity and respectful authenticity draw us to his soul-searching characters in a way that approximates documentaries”.

Timon Sturbej from Slovenia is a multi-award winning theatre and film actor who received high praise from the experts: “With sublime artistry and a raw vigor, his presence is so powerful and compelling that the audience’s eyes are locked on him wherever he is. Through subtle expressions and evocative presence, his performance is disarming,multifaceted and addictive – the epitome of acting”. His well-known films are Sexual Perversity by David Mamet and Consequences by Darko Stante as well as his nominated film, Riders/Spring Dreaming, by Dominik Mencej, which will be released this year.

The jury predicts “a very bright future…and a wide range of international opportunities″ for Swedish actress and writer Evin Ahmad - already well known for her roles in The Rain, Quicksand and One Red Eye - "who radiates unique energy which is both enigmatic and approachable”. She was nominated as a Shooting Star for the Swedish Netflix Original series Snabba Cash, adapted from best-selling author Jens Lapidus’ Stockholm Noir crime trilogy.

Souheila Yacoub from Switzerland is “a revelation and a shooting star in the truest sense.” The jury lauds her “tremendous ability to empathize with her characters in a way that evokes a strong resonance”. Yacoub has already worked with renowned directors such as Gaspard Noé and Philippe Garrel, starred in the series Les Sauvages and No Man’s Land and was at this year's Cannes Film Festival with two films in which she plays the leading roles: Des bas étage by Yassine Qnia and in the nominated film The Braves by Anaïs Volpe.

This year’s hybrid programme for the Shooting Stars provides a tailormade platform for the talent to meet journalists, casting directors, producers and filmmakers both online and on-site, offering a unique opportunity to create the personal contacts and network needed to embark upon an international career. The busy weekend culminates in an awards ceremony at the Berlinale Palast on Monday 14th February, where each actress and actor will be honoured with the EUROPEAN SHOOTING STARS Award.

16.05.2022 - European Film Promotion (EFP) and its member organisations are delighted to announce that 45 former participants of EFP's PRODUCERS ON THE MOVE …

12.05.2022 - Rays of promotional sunshine will highlight 46 European finished and unfinished films at this year’s Marché du Film at the Cannes Film Festival …