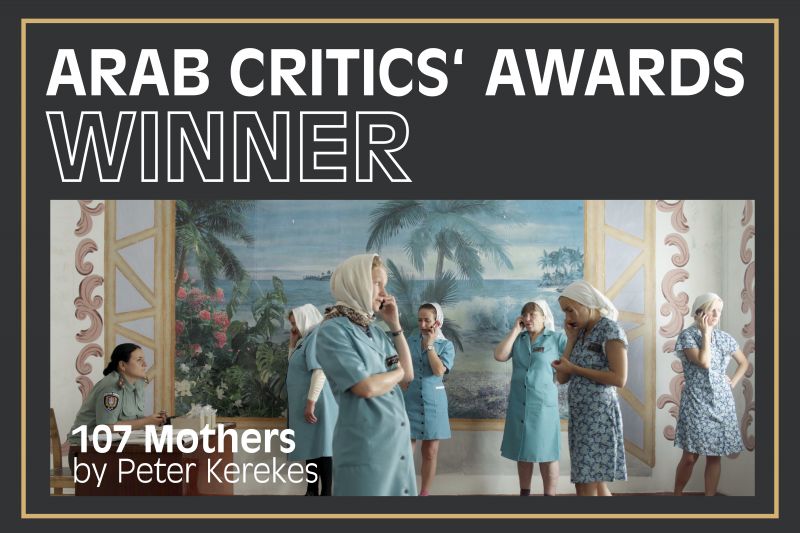 The Slovak-Czech-Ukrainian co-production 107 Mothers by the director Peter Kerekes has won this year’s Arab Critics' Awards for European Films, which is being presented for the third time by European Film Promotion (EFP) and Arab Cinema Center (ACC) at the Cairo International Film Festival.

Peter Kerekes received the award virtually on Wednesday, 1 December, during the gala awards ceremony hosted at this year’s Cairo International Film Festival which is running physically until 5 December, 2021.

"First of all, I was very happy that the film was selected for the Arab Critics Awards for European Films", Kerekes says. "My grandmother always told me: ‛Peter, you have to be in good company‘. When I saw the our film's title in the selection among such beautiful and powerful films, I knew that I had fulfilled the dream of my grandmother. To receive the award was a big surprise and a big honour for me."

Ola Al-Sheikh, Manager of The Arab Critics’ Awards for European Films says: "This year’s jury saw 26 European films that left us in total confusion because of their good quality and the closeness in the numbers of the votes. In the end, the award went to the remarkable film 107 Mothers. I send my congratulations to the film’s creators, and my thanks to my fellow jury members for the time and effort we exerted together for the sake of these events."

Based on a true story, director Peter Kerekes’ 107 Mothers centres on Lesya, who has just had her first child and been sentenced to seven years in prison for the murder of her husband. In the Ukrainian women's prison, the inmates are allowed to serve their sentence together with their children until they are three years old. 107 Mothers, a co-production between Slovakia, the Czech Republic and Ukraine, is the first fiction feature film by Peter Kerekes who has made a name for himself primarily as a producer - he was a Producer on the Move in 2009 - and director of documentaries (66 Seasons, Cooking History, Velvet Terrorists). 107 Mothers celebrated its world premiere at the Venice Film Festival and was awarded the main prize at Germany’s FilmFestival Cottbus, among others. The film has been selected as the Slovak entry for the Best International Feature Film category at the 94th Academy Awards.

The Arab Critics’ Awards for European Films was launched in 2019 by EFP and ACC and is meant to create a buzz for European films in the Arab world. It is a spin-off from the ACC’s now well-established Critics' Awards to boost film diversity in the region and raise the interest of sales and industry for outstanding European films. This initiative also aims to cast a light on the distinguished film critics from 15 Arab-speaking countries and their important role in opening up new perspectives and bridging cultural idiosyncrasies.

In 2019, the film God Exists, Her Name is Petrunya by Teona Strugar Mitevska won the first Arab Critics’ Award for European Films. In 2020, the award was given to the film Undine by Christian Petzold.