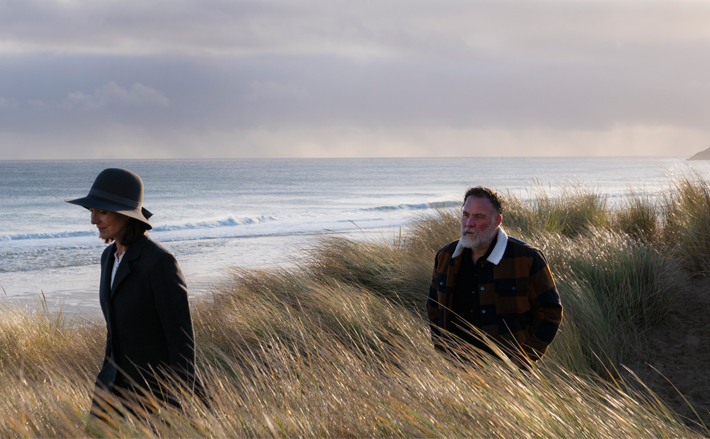 EFP (European Film Promotion) will highlight the latest and some of the most exciting European films at the upcoming Toronto International Film Festival (TIFF, 9 – 18 September) by working in close collaboration with TIFF Industry to offer the North American press an exclusive event two days ahead of the festival for the first time. Apart from this new offer, EFP will be organising the virtual EUROPE! UMBRELLA for 15 national film promotion institutes and a live industry panel for the Canadian industry in cooperation with Telefilm Canada and Eurimages.

In a moderated video conference on 7 September, North American press delegates will be treated to an exclusive first look of seven European films celebrating their world premiere at TIFF such as Nobody Has To Know by Bouli Lanners (Belgium, UK, France/ »Contemporary World Cinema«), As in Heaven by Tea Lindeburg (Denmark/»Discovery«), Arthur Rambo by Laurent Cantet (France/»Platform«), You Are Not My Mother by Kate Dolan, (Ireland/»Midnight Madness«), The Middle Man by Bent Hamer, (Norway, Canada, Germany, Denmark, Sweden/»Special Presentation«), Silent Land by Aga Woszczyńska (Poland, Italy/»Platform«) and The Daughter by Manuel Martín Cuenca (Spain/»Contemporary World Cinema«).

‟With this new offer in cooperation with TIFF Industry and with the support of the participating European national film promotion institutes, we are delighted that we can build upon our close and long-standing relationship with the festival and spotlight some of the best new European films and their filmmakers at TIFF to a select circle in advance”, says EFP Managing Director Sonja Heinen.

The virtual EUROPE! UMBRELLA at TIFF Industry, which received substantial support from Creative Europe and is backed by Eurimages whose representatives are part of the joint platform, will be hosting 15 national film promotion institutes from throughout Europe and promoting each of them with their latest titles in the various sections of this year’s TIFF Official Selections or TIFF Industry Selects.

Awarded the Camera d'Or for best debut feature in Cannes and a co-production between Croatia, Brazil, the USA, Slovenia and Italy, Murina by Antoneta Alamat Kusijanović tells a story of self-determination. The film, which was produced by Danijel Pek, Croatia's PRODUCER ON THE MOVE in 2020, focuses on the teenager Julija who has to find her place in the family again (»Contemporary World Cinema«). Waltz with Bashir director Ari Folman's new film recounts the life of the Jewish girl Anne Frank from a different perspective and directs the story as an animated feature film. Where is Anne Frank (Belgium, France, The Netherlands, Luxembourg, Israel) will be shown in the section for »Special Presentations«. In his poetic debut The Gravedigger’s Wife, Finnish-Somali writer-director Khadar Ayderus Ahmed tells a beautiful love story and, at the same time, addresses the health crisis in Africa. The Finnish-Somali-German-French co-production will be presented in the »Contemporary World Cinema« section. Diana Cam Van Nguyen directed her short film Love, Dad as a film collage of photos, letters and children's drawings. The Czech-Slovak co-production was selected for the »Short Cuts« Section. Întregalde, presented in the »Contemporary World Cinema« section, has three volunteers heading into the mountains to deliver humanitarian aid to the inhabitants of remote Transylvanian villages in the misty forests of the Carpathians. Romanian director Radu Muntean spins a mordant social critique of the rural-urban gap in Romania. The intimate chamber piece The Girl and the Spider about two women who no longer want to live together in the same flat was directed by Ramon and Silvan Zürcher. The Swiss production will be shown in the »Wavelengths« section. Bianca Stigter's documentary film Three Minutes - A Lengthening  expands amateur footage about a Jewish community in Nasielsk, Poland shot by David Kurtz in 1938 into an impressive contemporary document. Produced by Steve McQueen and narrated by Helena Bonham Carter, the film serves as a testimony for the victims of the Holocaust (TIFF Docs). I Am Zlatan directed by Jens Sjögren and produced by former Swedish PRODUCERS ON THE MOVE Fredrik Heinig and Frida Bargo as well as Mattias Nohrborg is a coming-of-age story about Zlatan Ibrahimovic who, after growing up in a rough neighbourhood in the south of Sweden, becomes one of the world’s biggest football stars (Sweden, Denmark, The Netherlands, TIFF Industry Selects). Tinna Hrafnsdóttir‘s debut feature film Quake, produced by PRODUCER ON THE MOVE Hlín Jóhannesdóttir based on a novel by Audur Jónsdóttir and tells the story of Saga, a single mother in her late 30s, who has to face her past after surviving epileptic attacks (TIFF Industry Selects).

>>click here to see the flyer of this year's TIFF attendees

Working in close collaboration with Telefilm Canada and Eurimages, EFP will also be hosting the live panel Co-Producing with Europe! A Success Story (9 September, 5:30 pm CET) focussing on Eric Warin and Tahir Rana's animation film for adults, Charlotte, which is screening as Special Presentation at TIFF.

The EFP member organisations German Films, Cinecittà, Polish Film Institute, UniFrance and British Council will be operating their own individual virtual stands alongside and in addition to the EUROPE! UMBRELLA. All in all, 20 European countries are attending TIFF this year to promote the latest European films from their respective countries.

News Films from Europe at TIFF 2021 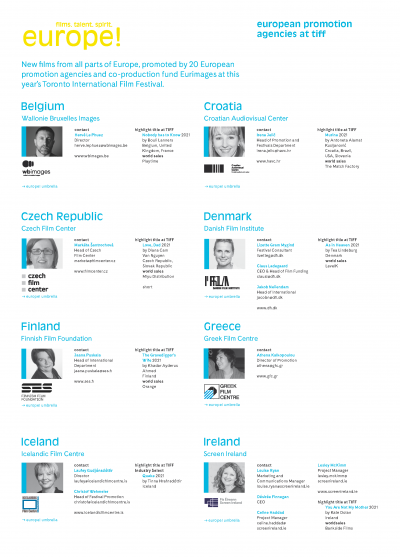