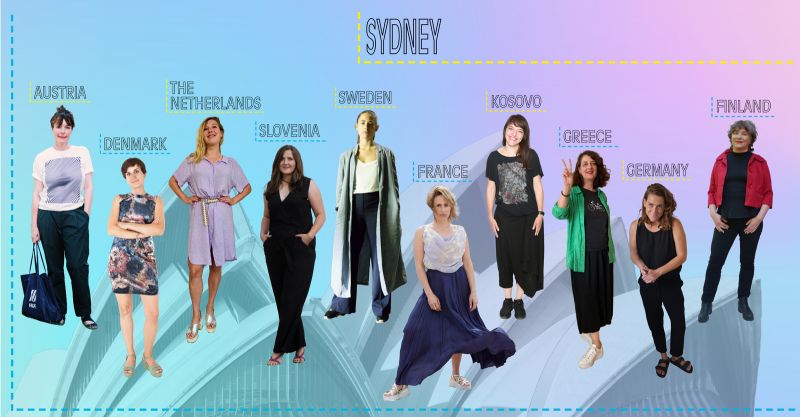 In its sixth year of collaboration with the Sydney Film Festival (SFF), European Film Promotion’s (EFP) dedicated programme, EUROPE! VOICES OF WOMEN IN FILM is celebrated in cinemas this year. Ten selected European films and their outstanding women directors will be presented at the 68th Sydney Film Festival from 3 – 14 November 2021.

"We are thrilled that our programme is coming back to Sydney’s cinema screens this year and are looking forward to turning this fine selection of voices by European women directors into an unforgettable cinematic experience. The films in this year's line-up zoom in on human ambitions colliding with nature and patriarchal, capitalist or xenophobic structures. They deal with the dualisms of our time, focus on ambivalences and offer the audience thought-provoking impulses rather than answers“, says EFP's Managing Director Sonja Heinen.

Shot around the Netherlands and the British Isles during the corona pandemic, Danish director Robin Petré uses sober as well as intimate close-ups to show the interconnection of humans, animals and the polluted sea in From the Wild Sea. In Green Sea by Greek director Angeliki Antoniou, a woman who has lost her memory struggles to recall her past and start a new life while cooking simple yet delicious food for workers in a run-down seaside tavern. Kosovan director Blerta Basholli's multiple award-winning film Hive follows the story of Fahrije whose husband has been missing since the war in Kosovo. Her determination to financially support her family by starting her own business is not only resisted by men. In How To Kill A Cloud, Finnish director Tuija Halttunen looks at the ambition and dilemma of Hannele Korhonen, one of Finland's leading climate researchers, to stimulate rainfall over the desert of the United Arab Emirates. In a shanty town near Madrid, the members of the Gabarre-Mendoza family are forced to leave their self-build homes because the land they live on is sold. Shot with non-professional actors, Isabell Lamberti's Last Days of Spring blends fiction with documentary. A xenophobic attack in Berlin changes the life of Nico, a German-Iranian geriatric nurse. Eline Gehring's Nico interweaves emotional insecurities, self-empowering survival strategies and enchanting elements of a fairy-tale. Pleasure by Swedish filmmaker Ninja Thyberg explores the dreams and sacrifices of 19-year-old Bella who moves from Sweden to Los Angeles to break into the porn industry world. In Reconciliation, Slovenian director Marija Zidar offers an impressively nuanced insight into an ancient law of the patriarchal Balkan society after a woman lost her life in a crossfire. Set in a highly selective ski club in the French Alps, Slalom by French filmmaker Charlène Favier follows the lines and boundaries of ambiguities between 15-year old high school student Liz and her ex champion trainer Fred. In Evi Romen's multi-award-winning Why Not You, 20-year-old Mario tries to get over the loss of his boyhood friend while shifting between being an outsider and imaginations of life.

After the Sydney Film Festival an assortment of the programme will travel to Melbourne's museum of screen culture ACMI and New Zealand's International Film Festival. Part of the selection will be shown beforehand at Canberra's newly launched Capital Film Festival (1 - 12 September 2021).

EUROPE! VOICES OF WOMEN IN FILM is supported by the Creative Europe - MEDIA Programme of the European Union and Eurimages and will continue its successful cooperation with European Women's Audiovisual Network (EWA) and Festival Scope. Media partners are Screen International, Fade to Her and Fred Film Radio.