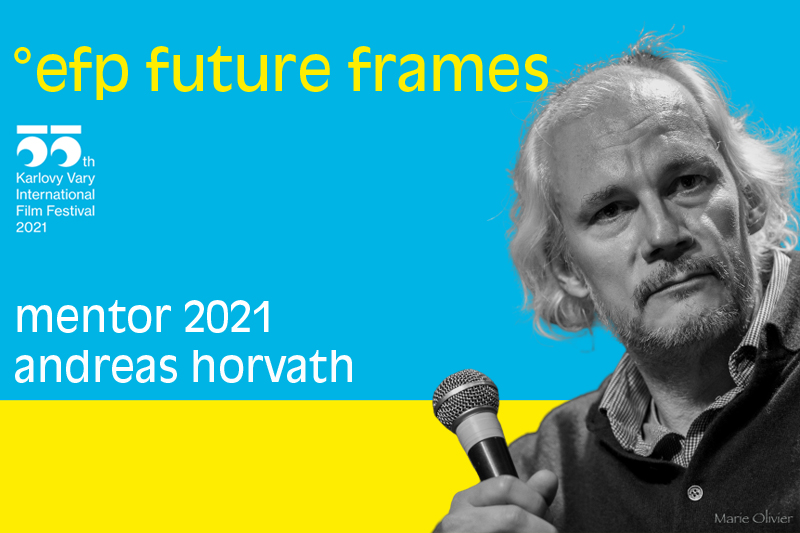 EFP (European Film Promotion) and the Karlovy Vary International Film Festival (KVIFF) are delighted to announce that the award-winning Austrian director and photographer Andreas Horvath will be this year's mentor for EFP FUTURE FRAMES - Generation NEXT of European Cinema at KVIFF from 20 to 28 August 2021.

In an exclusive master class as part of the multi-day hybrid EFP FUTURE FRAMES programme being held before and during KVIFF, Andreas Horvath will give an insight into his cinematic approach and visual language and reveal why he made his first feature film after many years working as a documentary filmmaker. His first fiction film, Lillian, will be shown exclusively to the young participants of FUTURE FRAMES. The Cannes entry from 2019 is inspired by the true story of the emigrant Lillian Alling, who decided to walk from New York to Russia in the 1920s. The director sends the performance artist Patrycja Płanik as Lillian on this journey.

Andreas Horvath was born in Salzburg in 1968. He studied Photography and Multimedia Art and has been working as a freelance filmmaker, photographer and lecturer since the mid-1990s. His award-winning documentaries, including This Ain't No Heartland (2004), Earth's Golden Playground (2013) and Helmut Berger, Actor (2015), screened at numerous international festivals such as Venice, Locarno, Karlovy Vary, Rotterdam, London, Chicago or San Francisco.

Horvath's involvement is part of an intensive programme introducing emerging professionals to the film industry and media as well as presenting their work to the festival audience. The ten filmmakers are nominated by their countries' national film promotion institutes, with the final selection being made by KVIFF's artistic director Karel Och and his programme team.

EFP FUTURE FRAMES – Generation NEXT of European Cinema is supported by the Creative Europe – MEDIA Programme of the European Union and presented by Festival Scope. Partner of FUTURE FRAMES 2021 is Nespresso. Main media partner is Variety, further media partners are Cineuropa and Fred Film Radio.