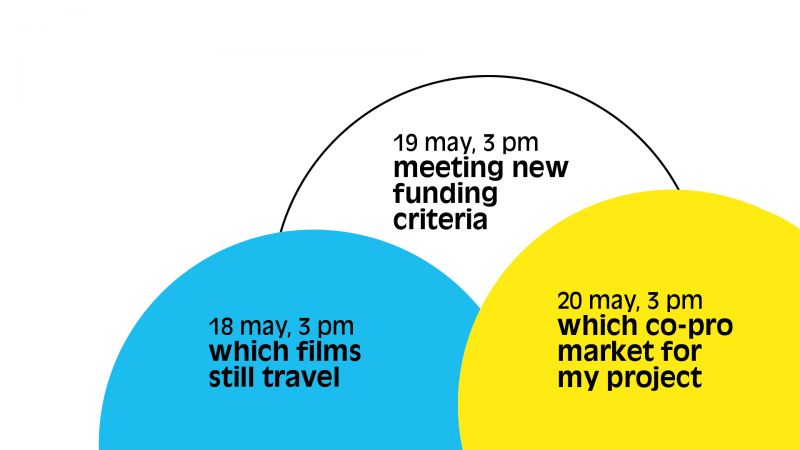 Apart from the tailor-made and individual programme for this year’s 20 Producers on the Move, that will be held online from 17 – 21 May, European Film Promotion (EFP) will also be offering three high-profile public online talks about the co-producing, funding and selling of projects in tough times.

Talk 1: SALES – WHICH FILMS STILL TRAVEL
The first talk on Tuesday, 18 May at 3pm CET will look at the current situation of sales companies after the short shock caused by the pandemic. How have rights holders had to look at different ways of doing business and what does this actually mean for arthouse films? Will the tried and tested partnerships between producers and sales continue as before? Tine Klint (LevelK), Hédi Zardi (Luxbox), Susan Wendt (TrustNordisk) and Nicolas Brigaud-Robert (Playtime) will be providing the answers at this session which aims to give producers indications of how the current changes could shape the future and lead distributors to develop new tastes and what this will mean for their future projects. The panel will be moderated by the Romanian producer Ada Salomon (Golden Bear winner Bad Luck Banging Or Loony Porn).

Talk 2: FUNDS – MEETING NEW FUNDING CRITERIA
The second talk with Helge Albers (Film Fund Hamburg Schleswig-Holstein), Kjersti Mo (Norwegian Film Insitute) and Tim Wagendorp (VAF – Flanders Audiovisual Fund), taking place on Wednesday, 19 May at 3pm CET, will focus on diversity and sustainability as new criteria for cinema and how to deal with 'checklists' as a mandatory funding requirement. The conversation will address the hurdles and misguided debate on the way to greater diversity. The panel will be moderated by Andrea Schütte from Hamburg-based Tamtam Film (In Your Arms, 2015; Love and War, 2018).

Talk 3: CO-PRO-MARKETS – WHICH CO-PRO MARKET FOR MY PROJECT
In the third talk on Thursday, 20 May at 3pm CET Martina Bleis (Berlinale Co-Production Market), Marit van den Elshout (CineMart Rotterdam), Amra Baksic Camo (CineLink Co-Production Market Sarajevo) and Marge Liiske (Baltic Event Tallinn) will give an insight into their daily work and the experiences of the past few years. They also reveal what kind of projects they are now looking for and if there are new selection criteria for the next market editions. The four experts will also give producers advice about whether it may sometimes be better to take part in smaller co-production platforms. The panel will be moderated by EFP's Managing Director Sonja Heinen.