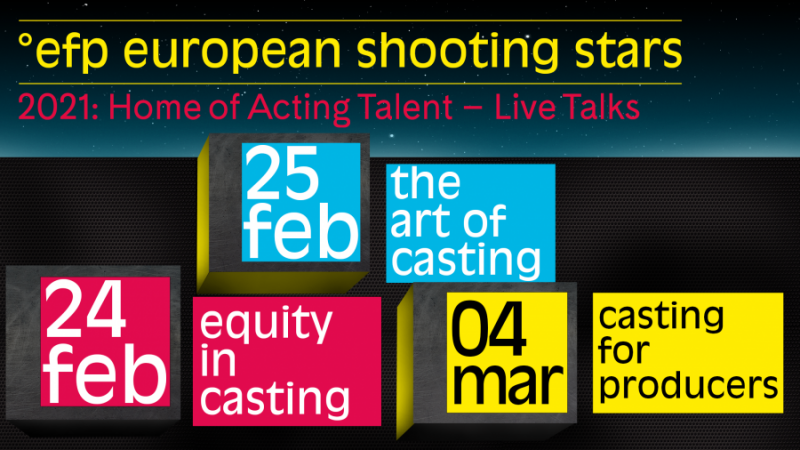 PANEL 1: EQUITY IN CASTING
The first panel will take place on Wednesday, 24 February at 5pm CET, moderated by Imran Khan, Head of Development, Big Window Production. The panel will include New York Casting Director Aleta Chappelle (Godfather III, Sister Act 2, Drumline, Nutty Professor), European-based American casting director and member of the 2021 Shooting Stars Jury Cassandra Han (Ford v. Ferrari, A Hidden Life, Barbarians), and London, Berlin and Istanbul based talent agent and actor Olgu Caglar who will discuss the current state of diversity in European film, as well as most effective path forward in pursuit of the goal for more equity and real-world result across the industry. The panel will discuss and reflect on their own roles and repsonsibilities and how casting could be a good starting point in overcoming existing stereotypes.

PANEL 2: THE ART OF CASTING
The second panel will take place on Thursday, 25 February at 5pm CET as part of the Actors Industry Network, and will focus on two recent highly reviewed, award-nominated productions: Bridgerton by Chris van Dusen, current nominee for the Screen Actors Guild Award (Best Ensemble & and Best Male Leading Role/ René-Jean Page) and Ma Rainey's Black Bottom by Georg C. Wolfe starring Viola Davis and US actor Chadwick Boseman, who sadly passed away last year. The casting in both productions has been recenlty praised by both the media and industry and the casting directors Kelly Valentine Hendry (Bridgerton) and Avy Kaufman (Ma Rainey's Black Bottom) will discuss the casting processes of their projects. The panel will be moderated by actress and talent agent Caprice Crawford.

PANEL 3: CASTING FOR PRODUCERS
The third additional panel will take place on Thursday, 4 March at 2pm CET as part of the Berlinale industry events, and in cooperation with the Berlinale Co-Production Market. The panel will ask: What’s the best pathway to putting together your dream cast? How is the collaborative relationship between director, producer and casting director optimized? Do you really need a “bankable” actor to get your project off the ground? If so, how do casting directors go about attaching a name? When do you have to sign a SAG-AFTRA contract? The international casting directors Timka Grin (Take Me Somewhere Nice, Heroes Don’t Die), Luci Lenox (Warrior Nun, starring Portugese Shooting Star 2021 Alba Babtista, Victoria, Vicky, Christina, Barcelona) and Nicci Topping (Small Town Hero, Heckle, Second Spring), as well as Gary Broughton of the casting networking platform Spotlight, will answer the questions in this session geared towards giving producers and directors real-world solutions to any and all casting conundrums.

The industry panels will follow the presentation of this year’s European Shooting Stars to international press, industry and public on 24 February, with host Edith Bowman introducing this year’s class and their nominated films, who will be joined by alumni guests Matilda de Angelis and Pilou Asbaek, and welcomed by Berlinale Managing Director Mariette Rissenbek. The Kick-off Show will be streamed online here on 24 February at 11am CET.