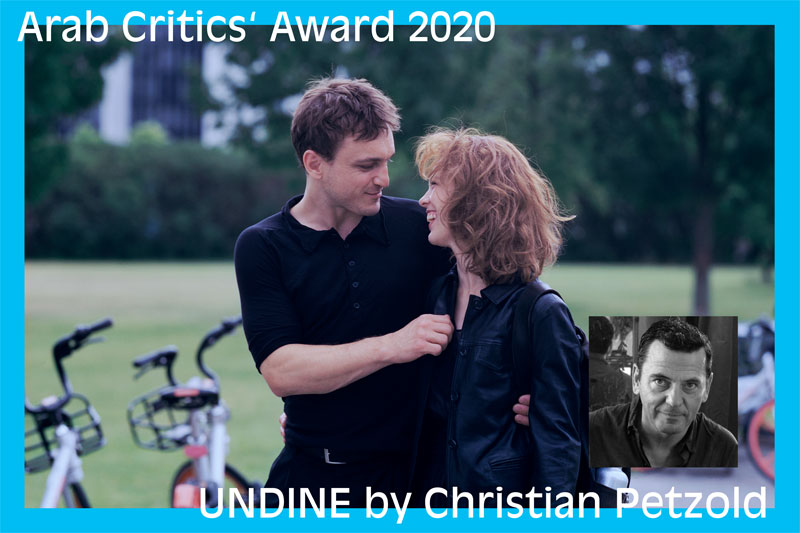 Christian Petzold received the award virtually on Monday evening, 7 December, during the gala awards ceremony hosted at this year’s Cairo International Film Festival which is running physically until 10 December, 2020.

" We are thrilled to receive the Arab Critics Award," he says. "Three years ago, when I was at the film festival in Cairo, I had already started thinking about Undine. At the end of the festival - we were invited for a sailing trip on the Nile - I was telling a bit about the story of the German myth of Undine, and we found ourselves wondering how an Undine who rises from the waters of the Nile would look like. We would love to be in Cairo, but, of course, for reasons we all know, that’s not possible - but we’ll definitely make up for that later. We send our best wishes to the jury and the festival, from here, under the grey autumn skies of Berlin."

56 film critics from 14 Arab countries selected the best European film out of 22 nominations submitted by the European national promotion film institutions - EFP’s member organisations. The director of the jury Ola Kamel Al-Sheikh is delighted "to announce the Arab Critics' Awards for European Films to Undine by director Christian Petzold of this year’s edition. My happiness with the result is complete because Undine is one of those you-can’t-miss films. It is delightful to see it among the official selection of the Cairo International Film Festival this year."

Undine is Christian Petzold’s personal view of the myth of the water spirit Undine who can only lead an earthly life and attain a soul through the love of a human being. His Undine defies her role as a powerless and spurned woman and falls in love anew with a man who dives into the sunken world of a reservoir.

The Arab Critics’ Awards for European Films was launched in 2019 by EFP and ACC and is meant to create a buzz for European films in the Arab world. It is a spin-off from the ACC’s now well-established Critics' Awards to boost film diversity in the region and raise the interest of sales and industry for outstanding European films. This initiative also aims to cast a light on the distinguished film critics from 14 Arab-speaking countries and their important role in opening up new perspectives and bridging cultural idiosyncrasies.

In 2019, the film God Exists, Her Name is Petrunya by Teona Strugar Mitevska won the first Arab Critics’ Award for European Films.