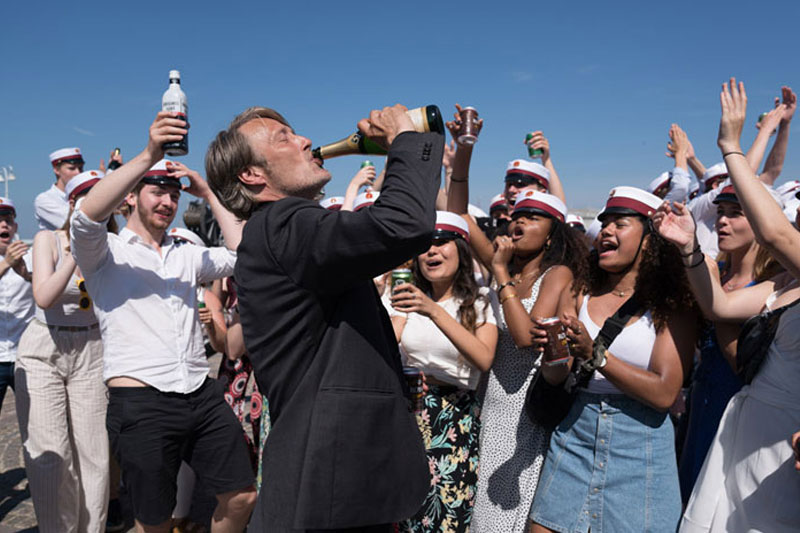 ANOTHER ROUND by Thomas Vinterberg (Denmark 2020 © Henrik Ohsten)

EFP (European Film Promotion) is putting a major spotlight on European cinema at the upcoming Toronto International Film Festival (TIFF, 10 – 19 September) by organising a virtual EUROPE! UMBRELLA for the national film promotion institutes, a promotional campaign for North American distributors, and two panels for the Canadian industry in close collaboration with Telefilm Canada.

Thanks to substantial support from Creative Europe, the virtual EUROPE! UMBRELLA at TIFF Industry will be hosting 14 national film promotion institutes from throughout Europe and is also being backed by Eurimages whose representatives are part of the joint platform. Alongside and in addition to EUROPE! UMBRELLA, the EFP member organisations German Films, ICAA (Spain), Istituto Luce Cinecittà (Italy), Polish Film Institute and Unifrance will operating their own individual virtual stands. All in all, 18 European countries will be attending TIFF to promote the latest European films from their countries and joining forces to support 25 European films and co-productions screening in the various sections of this year’s TIFF Official Selection. In addition, there are further films from Europe, which will be presented in the TIFF Industry Selects.

In Thomas Vinterberg’s new film Another Round, four friends test a theory that they will work and live better by maintaining a constant level of alcohol in their blood. Produced by former PRODUCER ON THE MOVE Sisse Graum Jørgensen, the Danish film, starring Mads Mikkelsen, Thomas Bo Larsen, Magnus Millang, Lars Ranthe and Norwegian SHOOTING STAR Maria Bonnevie, will be presented in the »Special Presentation« section in Toronto. Quo Vadis, Aida, the latest film from director Jasmila Žbanić, tells the true story of a translator attempting to save the lives of her husband and sons during the Bosnian genocide. The European co-production between Bosnia and Herzegovina, Norway, The Netherlands, Austria, Romania, France, Germany, Poland and Turkey will screen in the »Contemporary World Cinema« section. Beginning is the debut feature by Dea Kulumbegashvili, whose debut short, Invisible Spaces, was nominated for the Palme d’Or at Cannes in 2014. The Georgian-French co-production is about a Jehovah’s Witness missionary seeking justice in a remote Georgian village and will be presented in the »Discovery« section. The Oscar-nominated animation studio behind Song of the Sea returns with Wolfmakers, a tale of an unlikely — and magical — friendship between two girls in 17th-century Ireland. The Irish-Luxembourg-French co-production directed by Tomm Moore and Ross Stewart will be presented in the »Special Events« section. Award-winning director Gianfranco Rosi’s new documentary Notturno, a co-production between Italy, France and Germany, is an immersive portrait of those trying to survive in the war-torn Middle East and will screen in the »Masters« section. Another documentary is the Swedish film I Am Greta by Nathan Grossman about Greta Thunberg’s meteoric one-year rise from high-school climate strike organizer to inspiration for a global movement, which will be presented in the »Special Events« section.

***Click here to see the flyer of this year's TIFF attendees***

Working in close collaboration with Telefilm Canada and also in part with Eurimages, EFP will also be offering two live panels on TIFF's festival platform.

The first panel with the title It works will focus on co-production between Canada and European countries by presenting the case studies of two films supported by Eurimages: the Canadian-French-Ivory Coast co-production Night of the Kings by Philippe Lacôte, which is also part of this year’s TIFF line-up, and Tabija by Igor Drijača, which was co-produced by Bosnia and Herzegovina with Canada. How can the processes be navigated, and how can co-production between Canada and European countries be successful? The panel (11 September, 4 pm CET) with the producers Albert Shin (Canada), Adis Djapo, SCCA/PRO.BA (Bosnia and Herzegovina), Yanick Létourneau, Peripheria Films (Canada), Delphine Jaquet Banshee Films (France) as well as Marielle Poupelin from Telefilm Canada and Iris Cadoux from Eurimages will be moderated by EFP Managing Director Sonja Heinen.

The second panel – entitled Windows to the World: From Art House to Your House… and Somewhere in Between - will explore innovative partnerships and new business models created by distributors, exhibitors, festivals and platforms to find a flexible and open ecosystem in the pursuit of maintaining a sustainable business. What is the role of the various players in these new models? How does one nurture the love of cinema and how can this love translate across windows? The panel (10 September, 6 pm CET) with Damian Spandley, Director of Programme, Curzon UK, Tori A. Baker, President & CEO of Salt Lake Film Society and cofounder of the @homeArts platform, Robin Smith, CEO & Founder KinoSmith, Nicolas Brigaud-Robert, Playtime, and John Nein, Senior Programmer Sundance Film Festival, will be moderated by Jennifer Holness, CEO & Co-Founder of Hungry Eyes Media.

News Films from Europe at TIFF 2020 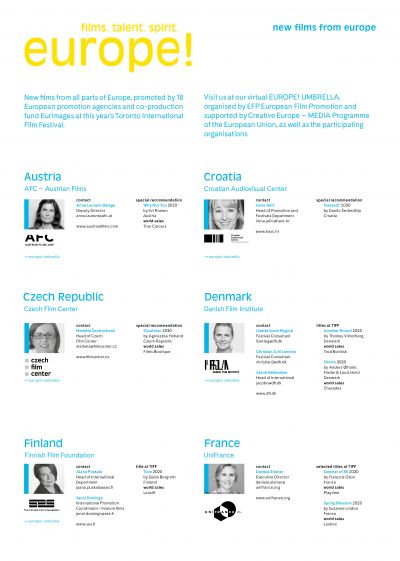