°efp focuses on digital networking in times of crisis 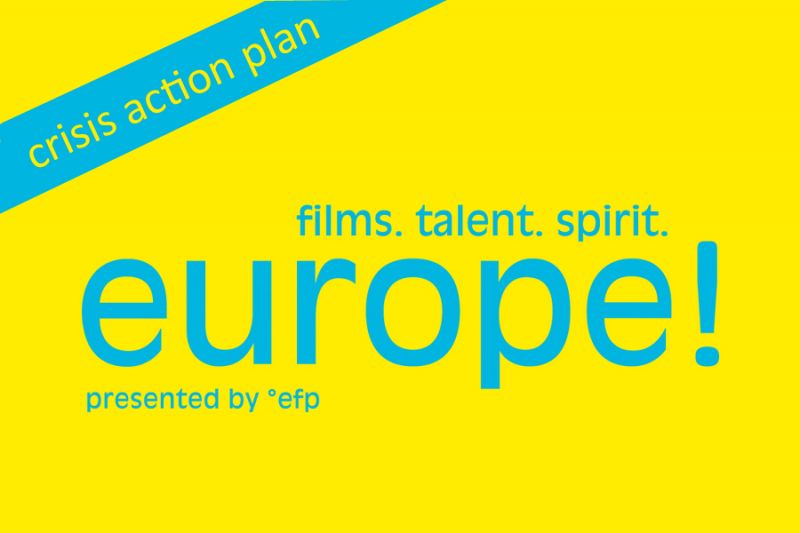 The national and international film industry is suffering from the impact of the corona pandemic. Film festivals worldwide are being postponed or cancelled completely. As a European network, EFP aims to continue promoting European films and talent throughout the world and support its members – the national film promotion institutes from throughout Europe –as well as the European sales companies, in these difficult times. For this reason an Action Plan has been developed which focuses on how the established networking and promotion programmes can be continued digitally.

„It is important to maintain the visibility of European films and talent during this terrible crisis", says EFP's President and Head of Czech Film Center Markéta Šantrochová. EFP Managing Director Sonja Heinen adds: „We are committed to promoting the diversity of filmmaking within Europe, and we want to continue to do so, especially during this totally unexpected situation. And even if these efforts can never, of course, replace the large-scale-audience-event and the face-to-face engagement of festivals, we are very committed to making things possible digitally at virtual events. However, we need to rely on member organisations and our long-standing partners to continue working and collaborating with us in order to make these things a reality."

In the current situation EFP has offered its members and other relevant industry partners help in accelerating exchange and facilitating communication with important decision makers, while at the same time ensuring transparency. Among other activities, the Action Plan includes a regular weekly Crisis Committee Meeting - which has already taken place twice (on March 26th and April 2nd). In these video conference meetings, EFP engages with all members, promotion bodies, sales agents, festivals and other industry partners and associations concerning the current situation and the issues around it.

Jérôme Paillard, Director of the Marché du Film in Cannes was our first guest, and he discussed the possibiity of a virtual Cannes market, and what that could look like. In the second meeting, participants had the opportunity to hear about the experience of festival directors who have run or are about to run their festivals/industry programmes online , including Yianna Sarra from Thessaloniki , Tine Fischer from CHP:DOX, Laurence Herszberg from Series Mania and Emilie Bujes from Visions du Réel Nyon. This information is then shared with other relevant parties, in an effort to find solutions to real problems and generate new ideas.

EFP is exploring opportunities to organize and present its traditional EUROPE! UMBRELLAs digitally at festivals outside of Europe within the potential virtual markets or online festivals (including virtual pitches, works in progress screenings and trailer presentations). Furthermore EFP plans to pro-actively backup, participate in, boost and collaborate with all partner festivals and markets which become virtual events as a result of the current crisis. EFP will engage all relevant digital tools to achieve this, such as chat rooms, zoom meetings, corners, whatsapp plug-ins, matchmaking and waiting rooms.

EFP will also offer the organization of immediate online training to embrace the digital shift in all promotion areas for its member organisations and other partners. More pragmatic skills are needed at this time to deal with rapid change. Subjects like social media, digital advertising, online traffic, b2b digital tools, VOD and overall awareness of the market's shifting realities will be our focus and the driving force of our activities.

THE CHANGING FACE OF EUROPE HotDocs, Toronto
For the third consecutive year, EFP and Hot Docs will present THE CHANGING FACE OF EUROPE as a dedicated section of the festival. Although the public screenings will be postponed to later in the year, the festival has announced plans to move ahead with the industry side of Hot Docs, which will be held as a virtual event, online (30.04. – 31.05.2020). The 10 outstanding documentaries in The Changing Face of Europe, which offer unique and unconventional insight into the reality of contemporary European life, will be presented to buyers, distributors and programmers through the films' partiicpation in the Doc Shop - Hot Docs secure streaming platform for accreditated industry. The filmmakers are also invited to participate in the new digital industry programmes including panels, case studies, Distribution Rendezvous and Industry Mico Meetings. In addition, directors and producers of films in The Changing Face of Europe will be brought together with key distributors, buyers and festival programmers via virtual one-to-one meetings arranged by EFP.

PRODUCERS ON THE MOVE, Cannes Film Festival
Independent from the Cannes Film Festival, which has been tentatively postponed from mid-May to the end of June, this years' PRODUCERS ON THE MOVE will take place on the dates as originally planned, 11-15 May 2020. 20 selected European producers will meet online this year and present their projects in speed-dating and roundtable pitches. A case study as well as talks with experts will round out the digital programme running over five days. Should Cannes take place at the end of June as currently planned, the group will have the opportunity to meet and get to know each other in person at the festival.

Film Sales Support (FSS) & International Markets
In accordance with the Creative Europe MEDIA Guidelines, EFP will do everything possible to make FSS more flexible and useful for European sales companies taking into account the current situation. In support of the sales agents' efforts to secure the circulation and distribution of European films outside of Europe, FSS will be made available for wholly digital promotion campaigns and pitches to overseas buyers (and not necessarily linked to the presence of sales agents at a festival or market). In addition, EFP is currently reflecting on how to implement digital umbrellas at the major film markets in Toronto, Busan (Asian Film Market) and Hong Kong (the postponed FILMART).