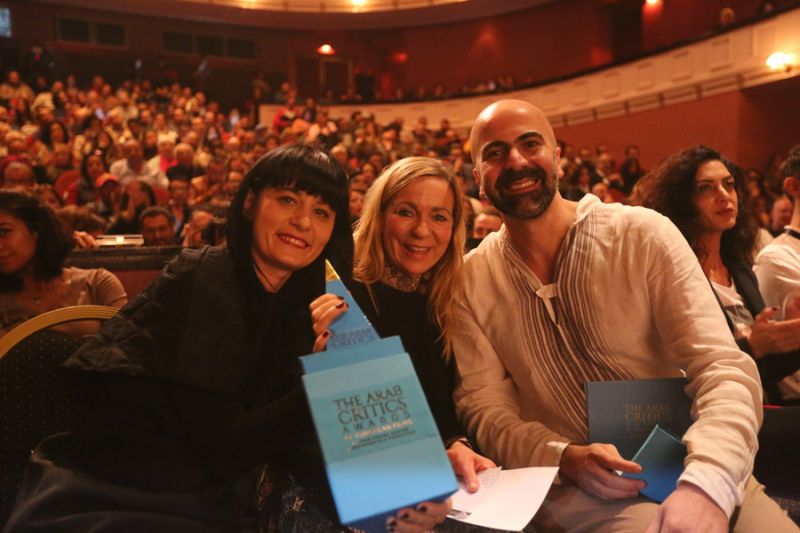 Labina Mitevska (producer and actress of God Exists, Her Name is Petrunya) with Sonja Heinen (EFP) and Alaa Karkouti (ACC)

Cairo, 23 November 2019. EFP (European Film Promotion) and the Arab Cinema Center (ACC) proudly present the winner of the first Arab Critics' Award for European Films God Exists, Her Name is Petrunya by Teona Strugar Mitevska. 42 film critics from 13 Arab countries selected the best European film out of 24 nominations submitted by national film promotion institutions from throughout Europe. The awards aims to promote European cinema to the Arab world and raise the interest of distributors and industry players for outstanding European films, while at the same time putting a spotlight on the distinguished film critics from so many Arab countries and their important role in opening up new perspectives and bridging cultural idiosyncrasies.

During a festive event at the Cairo International Film Festival, Sonja Heinen, Alaa Karkouti, Maher Diab and festival director Mohamed Hefzy presented the Arab Critics' Award to Labina Mitevska, producer and one of the lead actresses of the winning film.

In a joint statement, the extremely creative sisters thank the jury: "We are thrilled and greatly honoured by this award! We come from a country, a region, a zone of in-between that has been turned into a state of in-between, always becoming, never defined. To us, winning this award means that we are actually the bridge, not a gap. This award shows that culture is universal and that cinema can speak across continents. We believe in the power of cinema to exchange ideas and change minds, but, most importantly, to dare to say the unspeakable and the undesirable and, by doing this, start many uneasy, but necessary conversations. We believe that cinema is a high art that can speak to wide audiences and we must cultivate and nourish it as a public good in these times of commercialization and commodisation. We need to defend the freedom of expression as a basic human right, a right to provoke and dare the accepted systems of injustices. We love our job, cinema!"

EFP's President and Head of the Czech Film Center Markéta Santrochová is equally excited about the jury's decision: "We are absolutely thrilled that the first Arab Critics' Award goes to a film by an outstanding female director, with an equally outstanding female cast. Its strong message demanding equal rights for women is universal. The film's heroine, a level-headed everywoman, doesn't budge an inch to male dominancy and argues her case with clear-sighted common sense. Congratulations to Teona and Labina Mitevska for receiving this important award."

Maher Diab and Alaa Karkouti, founders of the Arab Cinema Center (ACC), add: "The diversity of the films nominated for the first edition of the Arab Critics' Awards for European Films made it a tough competition. The votes were so close and it was hard to anticipate the winning film. We would like to thank the film critics who participated in this initiative and congratulate the Mitevska sisters on their achievement and the award."

As part of its promotional advance into the Arab world, EFP also organises in cooperation with the festival a panel discussion on Strategies for Making Foreign-Language Films Less Foreign to Audiences centring on the following questions: What can we do to improve the situation for foreign-language films at the theatrical box office worldwide? What are sales agents, film festivals, national film promotion institutes, distributors and exhibitors doing to enhance the visibility of films outside their countries of origin? Can these stakeholders work better together? Is it a question of finding engaging new strategies or simply a matter of increasing the budgets for marketing and communication? Speakers on the panel moderated by Sonja Heinen, EFP's Managing Director, are: Alaa Karkouti, MAD – Solutions, Daniel Ziskind, Film Clinic Production, Agathe Valentin - Totem Films, Labina Mitevska - Winner of the European Critics' Award, Verena von Stackelberg – selection commitee Berlin International Film Festival.

Organized by MAD Solutions, the Arab Cinema Center (ACC) is now celebrating the fifth year since its inception in 2015. A non-profit organization registered in Amsterdam, the ACC is an international promotional platform for Arab cinema as it provides the filmmaking industry with a professional window to connect with their counterparts from all over the world through a number of its organised events. The ACC also provides networking opportunities with repre-sentatives of companies and institutions specialized in co-production and international distribution, among others.

The Cairo International Film Festival (CIFF) is one of only 15 Festivals accorded as a category "A" status by the International Federation of Film Producers Associations FIAPF. It is the oldest and only internationally accredited cultural feature film festival in the Arab World, Africa and the Middle East.

The history of CIFF goes back to 1975, after a visit to the Berlin Film Festival the late writer-critic Kamal El Mallakh and a group of like-minded cinema critics wondered why such a world-class festival couldn't take place in Egypt. The country was still riding the crest of Egyptian cinema's golden age and contained a formidable film industry, still the biggest in the Arab world. The Cairo International Film Festival was launched in 1976.