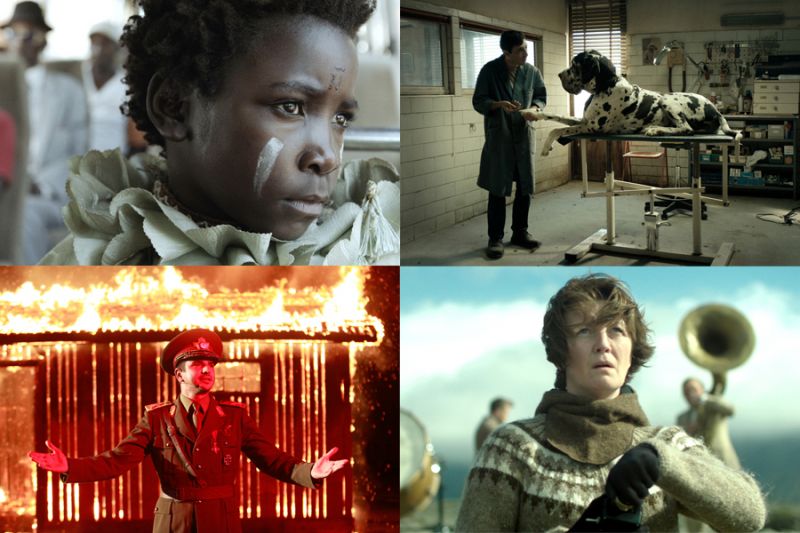 From upper left to lower left clockwise: I Am Not A Witch (UK), Dogman (Italy), Woman at War (Iceland), and I Do Not Care If We Go Down in History as Barbarians (Romania).

EFP's LA SCREENINGS – Oscar® Entries From Europe will take place from November 7 – 20, 2018. For the first time, EFP (European Film Promotion) will be screening 25 European Oscar® entries at two venues – the Dick Clark Screening Room and the Laemmle Monica – to provide more opportunities for Academy members, journalists, US distributors and international buyers to get an extensive overview of European cinema's great diversity. The screenings are designed to highlight European productions among the 87 submissions for consideration in the Academy's Best Foreign Language Film category. Quite a few filmmakers and actresses and actors will be seizing the opportunity to present their films in person. The European Oscar promotion campaign is being financially backed by the Creative Europe – MEDIA Programme of the European Union and the participating EFP member organisations.

Many of the 25 entries have made a splash at major festivals around the world, particularly in Cannes, like the much lauded Icelandic powerhouse Woman at War by Benedict Erlingsson, which was in competition in the Critics' Week. Another laureate is Pawel Pawlikowski from Poland, who won Best Director for Cold War, a drama about a passionate, but impossible love story set in the 50's. The multiple award-winning Italian entry Dogman by Matteo Garrone garnered Best Actor and the Palm Dog for the canine cast. And Ali Abbasi received the Un Certain Regard Award for the Swedish entry Border about a customs officer with a very special gift. Kosovar director Blerta Zeqiri won the Special Jury Prize and the FIPRESCI Prize at Tallinn's Black Nights Festival for The Marriage in which an unexpected love triangle causes major distress for newly-weds. Premiering in Berlin and last seen in Telluride and London, the Oscar nominee Markus Imhoof presented his Swiss documentary Eldorado which - together with three other documentaries: The Waldheim Waltz (Austria), To Be Continued (Latvia), and Wonderful Losers: A Different World (Lithuania) – has also been submitted for consideration in the Best Documentary Feature category.

Six of the European Oscar submissions won top national film awards in their home countries, with three of them by women directors: Polyxeni by Dora Masklavanou (Greece – three Hellenic Film Awards) about the fate of an orphaned Greek girl, What Will People Say by Iram Haq (Norway – four Amanda Awards), telling the story of a young Pakistani immigrant girl living a double life in Norway, and I Am Not A Witch by Rungano Nyoni (BAFTA for Outstanding Debut by a British Director), the dramatic story of a young Zambian girl doomed to live in a witch camp. Prizes were also picked up by films from their male colleagues: Wonderful Losers: A Different World by Arūnas Matelis (Three Lithuanian Film Awards), The Resistance Banker by Joram Lürsen (The Netherlands – five Golden Calf Awards) and Pilgrimage by João Botelho (Portugal – three Sophia Awards).