Picking up on the vibe of its members and stressing the importance of pan-European alliances, EFP (European Film Promotion) has created a new claim, EUROPE! Films. Talent. Spirit., backed by a new design to highlight European cinema and its talents at festivals and markets worldwide.
The new look will be presented for the first time at the Toronto International Film Festival (TIFF, September 7 – 17). EFP Managing Director Sonja Heinen elaborates: "More than ever, we want to emphasize the importance of the European idea and celebrate the very diverse energy of the national film cultures represented in a common spirit by our 38 member organisations. The new design unites all of our EFP projects under one label to distinguish them at first glance at festivals and film markets worldwide. And the new claim also affirms EFP's role as an important networking platform which organizes events and central meeting points at major film occasions throughout the year."

After its successful run at TIFF in 2016, EFP has again organized a EUROPEAN UMBRELLA for 13 EFP members, bringing the number of European countries present at the TIFF Industry Centre to 23, including 11 EFP members with further stands. Together, they support 160 European films and co-productions presented in the various sections of the festival.

The festival selection also shows a strong presence of former EFP Producer on the Move (POM) participants, such as the world premiere of the tense political drama THE JOURNEY which was produced by, among others, the UK's Isabelle Stead and Hélène Cases from France, who first met at the EFP's Producers Lab in Hamburg in 2014; GUTLAND, a supernatural drama headed by Luxembourg producer Gilles Chanial (POM in 2013); the Swedish-German co-production EUPHORIA which Frida Bargo pitched as a project during POM in Cannes in 2016. Transcontinental productions include the Chilean entry A FANTASTIC WOMAN which was co-produced by Janine Jackowski whose Komplizen Film also realized TONI ERDMANN; and A SORT OF FAMILY from Argentina, which was co-produced by Mikkel Jersin (Denmark, POM 2016), Eva Jakobsen (Denmark, Producers Lab Toronto 2015) and Oliver Damian (Germany, POM 2010).

Financial backing for this European meeting point at TIFF has been granted by the Creative Europe – MEDIA Programme of the European Union with additional support from the participating EFP members and from Eurimages – European Cinema Support Fund who will be joining the European Umbrella for the first time to provide comprehensive information about funding on a European level – with a special focus on Canada which recently became an associate member of Eurimages.

Information about all of the films supported by the EFP members under the European Umbrella is available here: 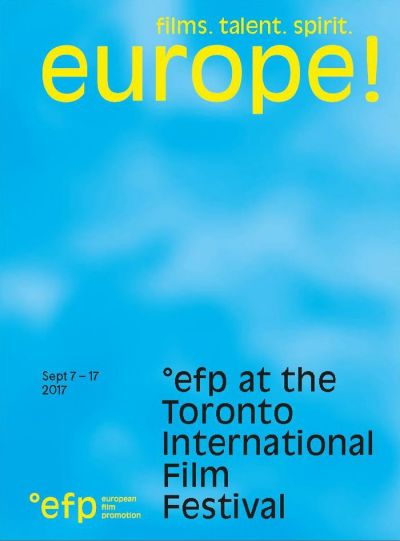