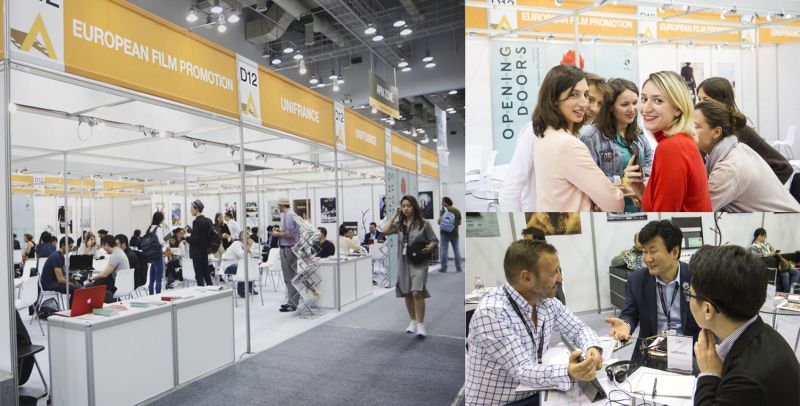 Business to Asia for sales companies from Europe was well under way right from the beginning at the European Umbrella during the Asian Film Market where 37 sales companies made for a bustling group. Although the market felt perhaps a little quieter this year, the sales agents under the European Umbrella were as busy as always. Together with UniFrance, EFP has indeed created one place at the market where Asian buyers are able to meet with Europe's industry. It is mutual consent amongst the attending sales agents that the variety of companies and the strong visibility of the Umbrella work in everyone's favour.

For LevelK and Films Boutique, as one of the regulars, it is extremely important to attend the Asian Film Market every year, enabling them to concentrate on Asia as there is so much more time in Busan to meet new buyers in a relaxed atmosphere and to follow up on meetings in Toronto. It made perfect sense for Hedi Zardi, CEO of French sales outfit, Luxbox, to join the Umbrella for the first time. He was thrilled to have had more meetings under the European "roof" than he achieved in previous years with his own stand. The UK's Hanway value the Asian Film Market as a good second market in Asia to not only meet with buyers from Korea but also from Taiwan, the Philippines, Thailand and China. The number of meetings has also soared for New Europe Film Sales since the company first started to come to Busan. They are now definitely reaping the fruit of following up on their contacts every year.

Films Boutique is happy to announce sales to Japan's distribution company, Magic Hour, of its Icelandic film, Heartstone by director Gudmundur Arnar Gudmundsson who was also part of European Film Promotion's artistic delegation to Busan. Documentary sales company, Wide House, has sold Renzo Piano, An Architect For Santander by Carlos Saura to Edko Film in Hong-Kong, Bac Films has made a few deals with Taiwan and has had many offers for further titles, Sola Media, a company specializing in children's films, has likewise received many offers and is waiting to close up on three deals. New Europe Film Sales has received concrete offers for Porto by Gabe Klinger and TrustNordisk has sold The Commune by Thomas Vinterberg to Japan.