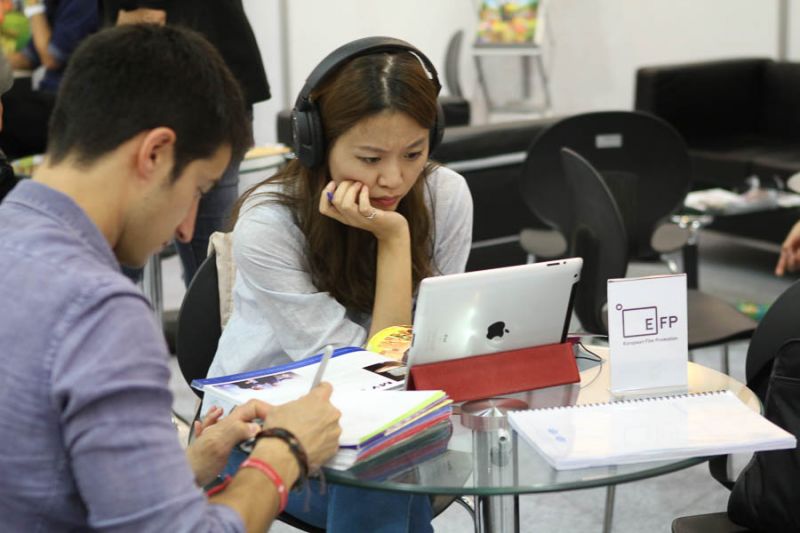 Busy days at EFP's European Umbrella Booth which has been running October 3-6 at the Asian Film Market in Busan (South Korea) and just closed its doors. The Market was highly intense, 43 sales companies and EFP member organisations hold meetings back to back at the EFP's stand. A couple of deals have been concluded. EFP asked some of the sales agents how business was like this year.

Beta Cinema (representative Tassilo Hallbauer)
Beta Cinema has been coming to the Asian Film Market for the fourth year in a row, concluding 3 to 4 deals annually on European Films. Beta's regular presence has paid off for the company in many ways, be it that relationships to buyers of the region have intensified over these years or relationships with new Asian companies are being established. Working alongside co- sellers from Europe under the EFP Umbrella has been beneficial in many ways too, says Tassilo Hallbauer, Beta's representative at Busan. Hallbauer, though, would welcome to see more buyers from the whole of Asia at the Asian Film Market to intensify business.

Protagonist is  likely to close a couple of deals for European films in Asian territories very soon and is happy to have made its deput visit to the market. "It has been a wonderful opportunity to meet with new buyers" says George Hamilton from Protagonist. Both Hamilton and Ana Chettle from Hanway emphasize that EFP's Film Sales Support for the marketing of their films and having a 'home' at the European Pavilion have been instrumental for their attendance.

The new company, Stray Dogs (Nathan Fischer) from France is in Busan for the first time and finds the Market excellently organised. He appreciates the visibility of the European Umbrella and the chance to conduct meetings with buyers easily under these favourable conditions.

Nicolai's Trustnordisk is having as many meetings here in Busan as colleagues of his in Cannes. That's how busy it gets.

The synergy between BIFF and the Asian Film Market fares well for the sales companies, as they enjoy meeting buyers at the festival's evening events increasing networking opportunities. The casual settings allow for contacts on a more personal level. Some companies however mention that they are missing a few buyers from Asia at this year's market contributing to less "traffic".

The animated children's film, Raven, The Little Rascal by Ute von Münchow-Pohl & Sandor Jesse which screened in the festival has been sold to Korea. The film receives Film Sales Support from EFP.

Derek Lui of Denmark's LevelK is happy to announce sales to Korea of Men & Chicken by Danish director Anders Thomas Jensen. The marketing of the film is also supported with Film Sales Support. Lui heads LevelK's new office in Hong Kong which pursues a long-term approach to Asia.

Thanks to Creative Europe – MEDIA and a financial contribution by EFP members, UniFrance films and German Films, the European Umbrella Booth is able to thrive each year.

Please find below the line-up of sales companies and six EFP member organisations (in italics) that were present at the Booth: