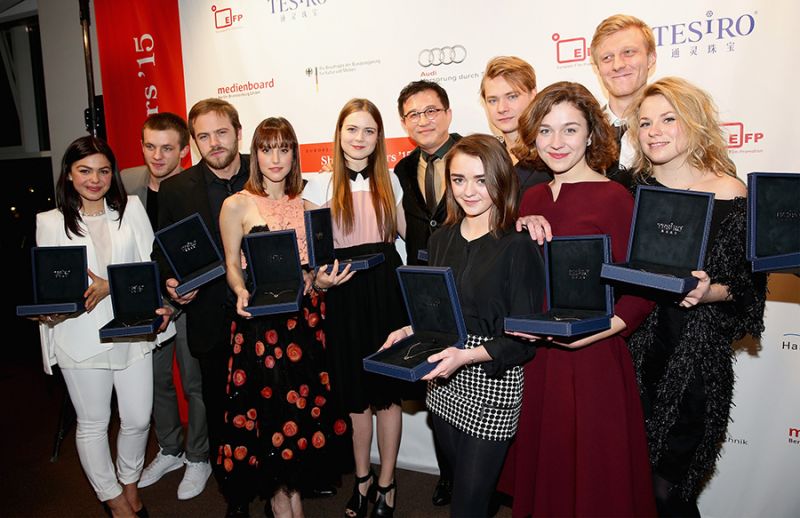 7 February 2015, Berlin:  Having just arrived at the Berlinale from across Europe, this year’s EUROPEAN SHOOTING STARS were welcomed at a reception held on Saturday night at the TESIRO Golden Bear Lounge by Richard Shen, President of TESIRO. Here each of the ten promising young actors were presented with a stunning jewellery keepsake, honouring their individual achievements and attendance at Berlin International Film Festival (5 – 15 February).

Chinese jewellery company TESIRO, now in its seventh year of supporting European Film Promotion´s SHOOTING STARS initiative and moreover donating the prestigious SHOOTING STARS Award, will present this to each of the selected actors and celebrate their outstanding accomplishments to date, as well as their future endeavors. The Awards Ceremony will culminate a weekend of activity for the Stars in Berlin and takes place on Monday 9th February at the Berlinale Palast.
This showcase of exceptional international acting talent, now in its 18th year, will return to introduce the film industry at large to an extraordinary range of up and coming performers at the start of their careers.

EUROPEAN SHOOTING STARS is financially supported by the Creative Europe - MEDIA Programme of the European Union and participating EFP member organisations. Furthermore the project is supported by its cooperation partners.

To attend the SHOOTING STARS Press Events (photocall on 8 February, press presentation and interviews on 9 February) please confirm your participation with Organic Publicity: