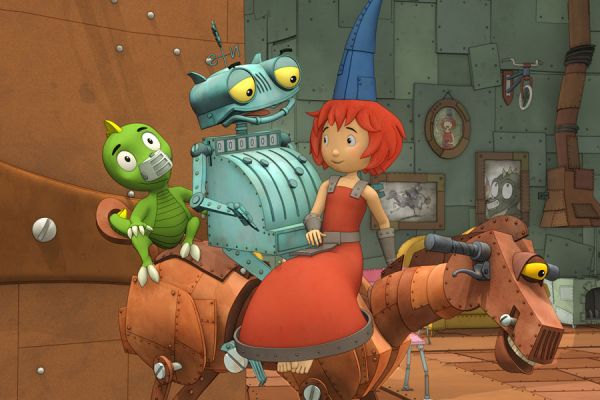 Rusty, a vain but kind-hearted knight, lives in the magical kingdom of Scrapland, where everybody is made out of scrap metal and everything is alive. Rusty beats arrogant Prince Novel against all odds to win the great knights' tournament. Damsel Bo will surely forgive him now for trading her cherished sewing machine for a winning engine for his horse Chopper, won't she? His moment of triumph is short-lived, however, as Rusty is wrongly accused of theft, stripped of his knightly honour and of his castle. To make matters worse, disappointed Bo is easy prey for the scheming Prince Novel who persuades her to move into his splendid castle. But Rusty does not give up easily! Together with his loyal sidekicks, Chopper the horse and Coke the little dragon, he sets out to restore his honour. To do this, he must slay a dragon and present its head to the King - a quest that leads him down a dark and dangerous mine where the two-headed monstrosity lives. Meanwhile, Bo has found out about Prince Novel's evil plan and tries to warn the King, but is it too late to stop the Prince from taking over the kingdom? Hope now rests entirely on Rusty who mobilises an army of toasters and other household appliances for the great battle. Scrapland would surely be lost without a true knight...