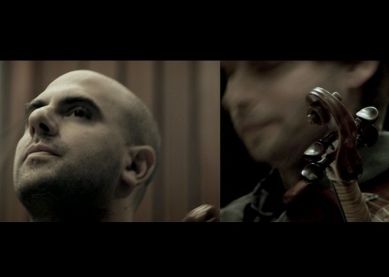 Gifted visual artist Douglas Gordon - his work will be featured in TIFF Bell Lightbox's Essential Cinema exhibition this year - deconstructs the on- and off-stage relationship between two Israeli musicians in k.364. They are introduced in casual, fragmented conversation, their faces reflected in the windows of a train as they make their way along the very rail lines that carried family members to their death during the Holocaust. Fragments of rehearsals follow, then the screen splits in two and we watch the masters perform Mozart's "Sinfonia Concertante in E Flat Major." Gordon shoots them as a pair, from a multiplicity of angles, capturing those elegiac moments between solos when the two seem to pass their love of music back and forth. Many will recall Gordon's film Zidane: A 21st Century Portrait, which used a similarly isolative technique on the soccer player to extraordinarily poetic ends.