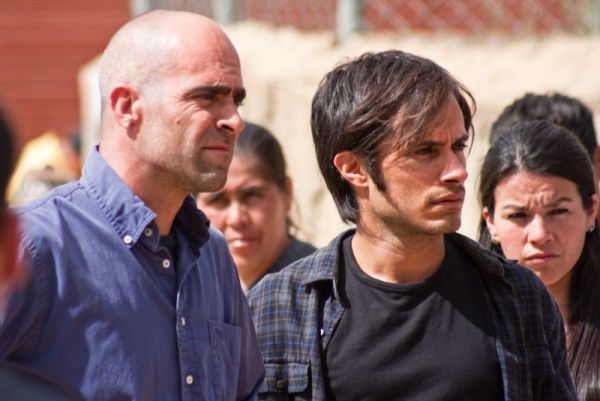 TAMBIEN LA LLUVIA sets up an intriguing dialogue about Spanish imperialism through incidents taking place some 500 years apart, while examining the personal belief systems of the members of a film crew headed by director Sebastian (Gael Garcia Bernal) and his producer Costa (Luis Tosar) who arrive in Bolivia to make a revisionist film about the conquest of Latin America. Set in February and March of 2000 when real-life protests against the privatization of water rocked the nation, the film reflexively blurs the line between fiction and reality in what Variety calls "a powerful, richly layered indictment of the plight of Latin America's dispossessed." Carlos Aduviri is dynamic as a local who is cast as a 15th century native in the film, but when the make-up and loin cloth come off, he sails into action protesting his community's deprivation of water at the hands of the government. Meanwhile, Gael Garcia Bernal's Idealist film director is as relentless as Werner Herzog infamously was in making FITZCARALDO, pushing ahead against all odds, ignoring the prevailing danger about to disrupt at any moment. Despite the devastation emerging around him, Sebastian seems unable to engage with any emotion over than a dogmatic desire to get his film done. And of course, the film also recalls themes in Herzog's AGUIRRE, THE WRATH OF GOD and the film-within-a-film scenes are as brutal as any in APOCALYPTO.

EVEN THE RAIN is by far the most complicated movie I have made. It has been an adventure and a great challenge for everyone involved, but very exciting. How do you eat an elephant? Bite by bite, as the saying goes. How do you shoot a movie with so many extras, characters, and so much action? Shot by shot. That's how I faced it, planning every scene meticulously, casting and directing all the extras individually, working phrase by phrase with actors who had never acted before, and relying on a remarkable cast and crew, Spanish as well as Bolivian.