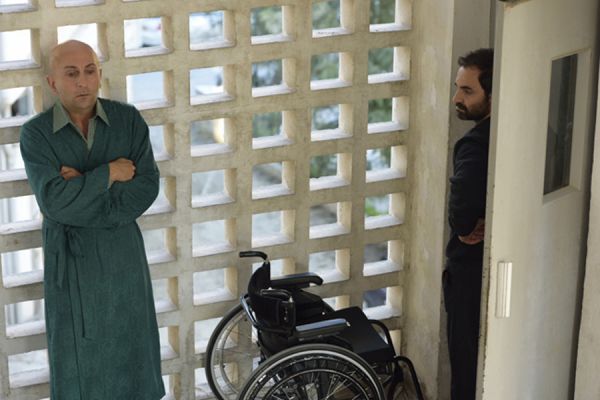 Costas is a television writer who has to deliver the next episode of «Rosemary», the popular soap opera he has been writing, for some time now. He is a good writer in his field and defends his work. But he has run out of ideas. He is in a state of writer's block and pressure from his producer Spyros is not helping. However nothing else in his life seems to be of any help either, neither the early morning strolls by the sea, nor the new apartment he has just moved into.
By chance, he discovers that he can spy on the family who live in the next door flat, through his bathroom window. Chrysso, a melancholic young woman in her early twenties and Kypros, her somewhat older brother who is paralised and is in a wheel-chair due to some muscular dystrophy, are both under the overbearing, dynastic rule of their violent, alcoholic father, Xenis. He is unnecessarily harsh towards Chrysso and for some reasons of his own, does not want her to go out. Their mother and Xenis's wife, Eleftheria, is a sulky woman shrouded in some dark secrets of her own. There is little she can do, even if she had cared to, to prevent the violent outbursts of her husband.
Costas 'discovers' his missing inspiration through this family, more so in Chrysso. He begins transferring the goings on next door first to text and then to the TV screen. «Rosemary», the heroine of the soap opera, gradually begins to live on screen the real life events of Chrysso's life. Events on the screen however, become 'sanitised' and beautified, adapted to the idyllic world of the soap opera.
Costas's interest intensifies all the more around Chrysso's secret life. He aslo seems to be attracted by her. Chrysso often leaves the house unbeknown to her father and without his permission. Costas sees her get into a car that drives off to some unknown destination. He transfers this event to the soap opera, and so in the next episode, a stranger picks up «Rosemary» with a car. His producer, as well as everyone else wait with trepidation for the next episode, when the stranger will be revealed. Costas also 'injects' the soap opera with a dose of 'realism', translated in the TV jargon of the genre by introducing face-slapping. Fake slaps, however, which differ enormously from the real ones Xenis doses out to Chrysso.
Things appear to be flowing smoothly along and, despite his initial mistrust, the producer is excited by Costas's new ideas which 'sell' , registering high viewing rates.
Costas next makes a brief visit to his brother and sister, who live in the village. His elder sister still lives in their family home where she looks after their younger brother who is mentally handicapped. As a small child he had fallen in a water tank and nearly drowned. Since then, he has lost all ability to communicate or respond to the world around him. He does not speak, see or feel anything. He merely exists.

Returning back to town, Costas realises that it is not a man who picks up Chrysso on her secret outings, but a woman. So, in the next episode, «Rosemary» becomes a ... lesbian, despite reactions - not only from the producer but from the actors as well.